Living in the city of Amsterdam, I have been lucky to witness the beauty of this city first-hand. Right from enjoying the beauty of nature  during the Tulip festival, the views from different buildings on the Open Tower Day, to the amazing celebration of diversity and freedom that is on display during the Amsterdam Gay Pride Parade, I have been very lucky to see it all, and on more than one occasion. 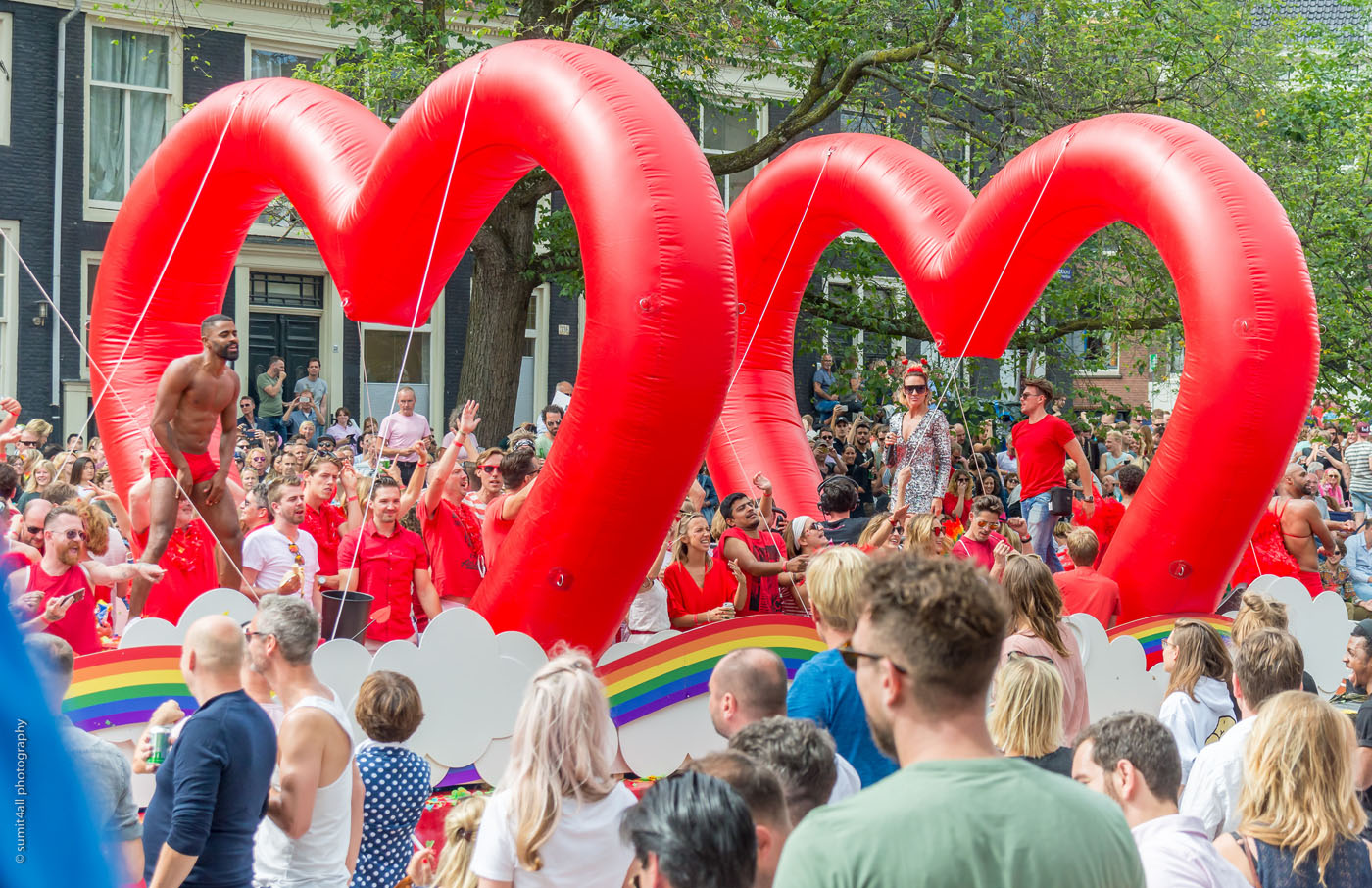 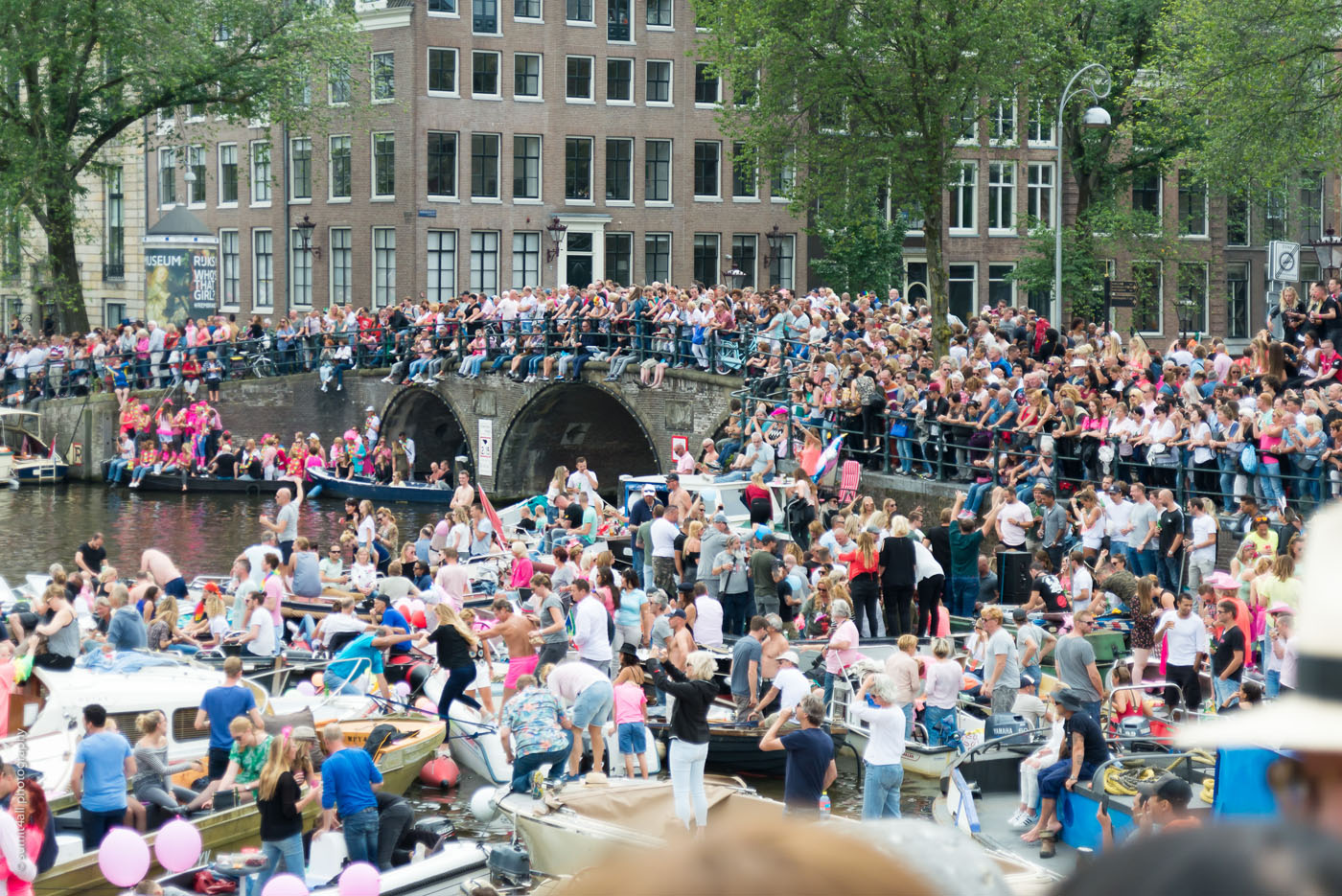 The Gay Pride Parade in Amsterdam takes place on the first weekend of August every year. The festival takes place city-wide, and is one of the largest public annual events that attracts about half a million spectators. The parade is a wonderful amalgamation of like-minded people out to celebrate freedom and diversity along with friends and family.

The Gay Pride Festival usually spans over a week with the Canal Parade as the peak celebration of the festival. A week-long celebration of over 160 events, parties and street parties, exhibitions, cultural and sports events, take place all over the city and the week of fun usually ends with a closing party on the following Sunday after the Canal Parade. 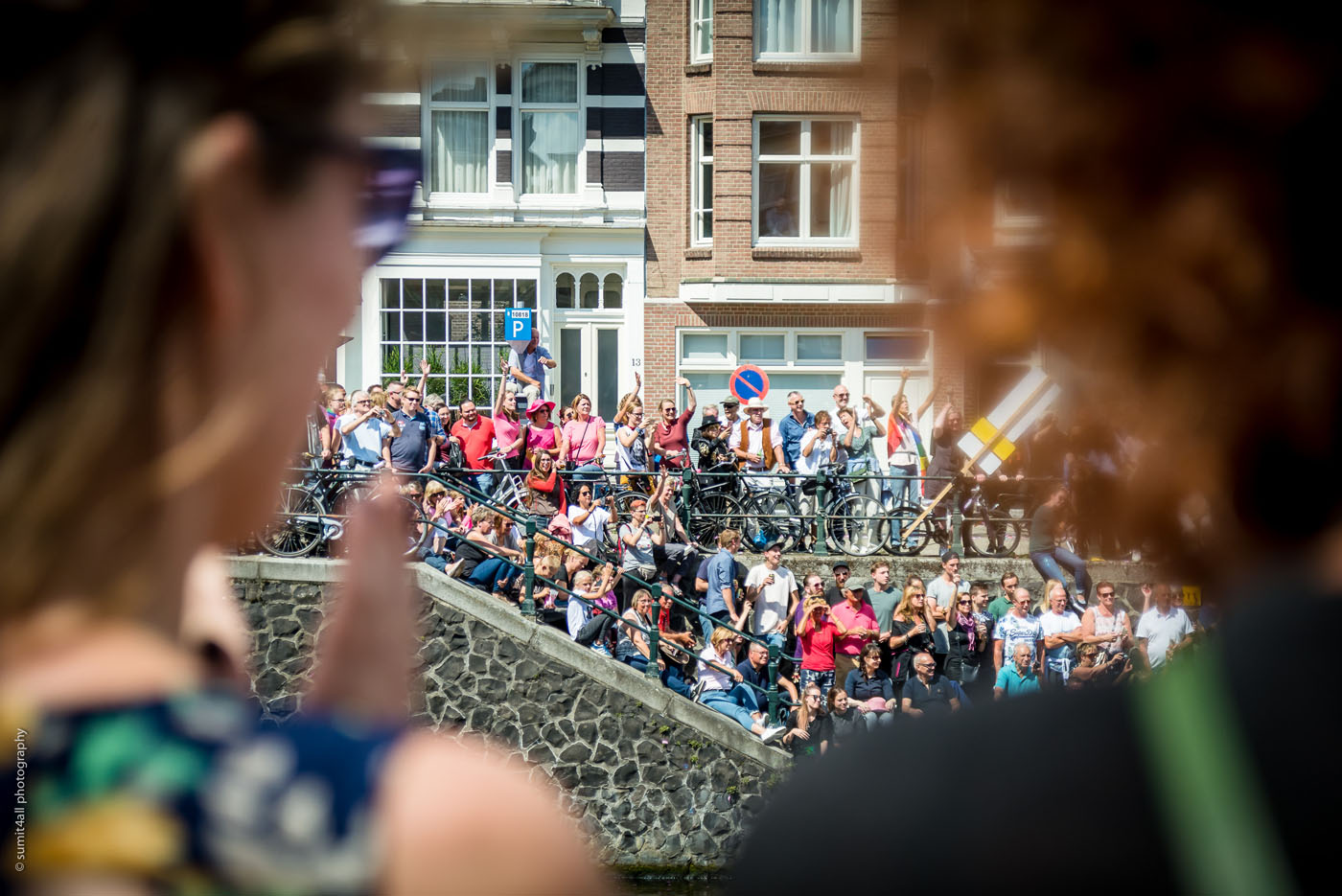 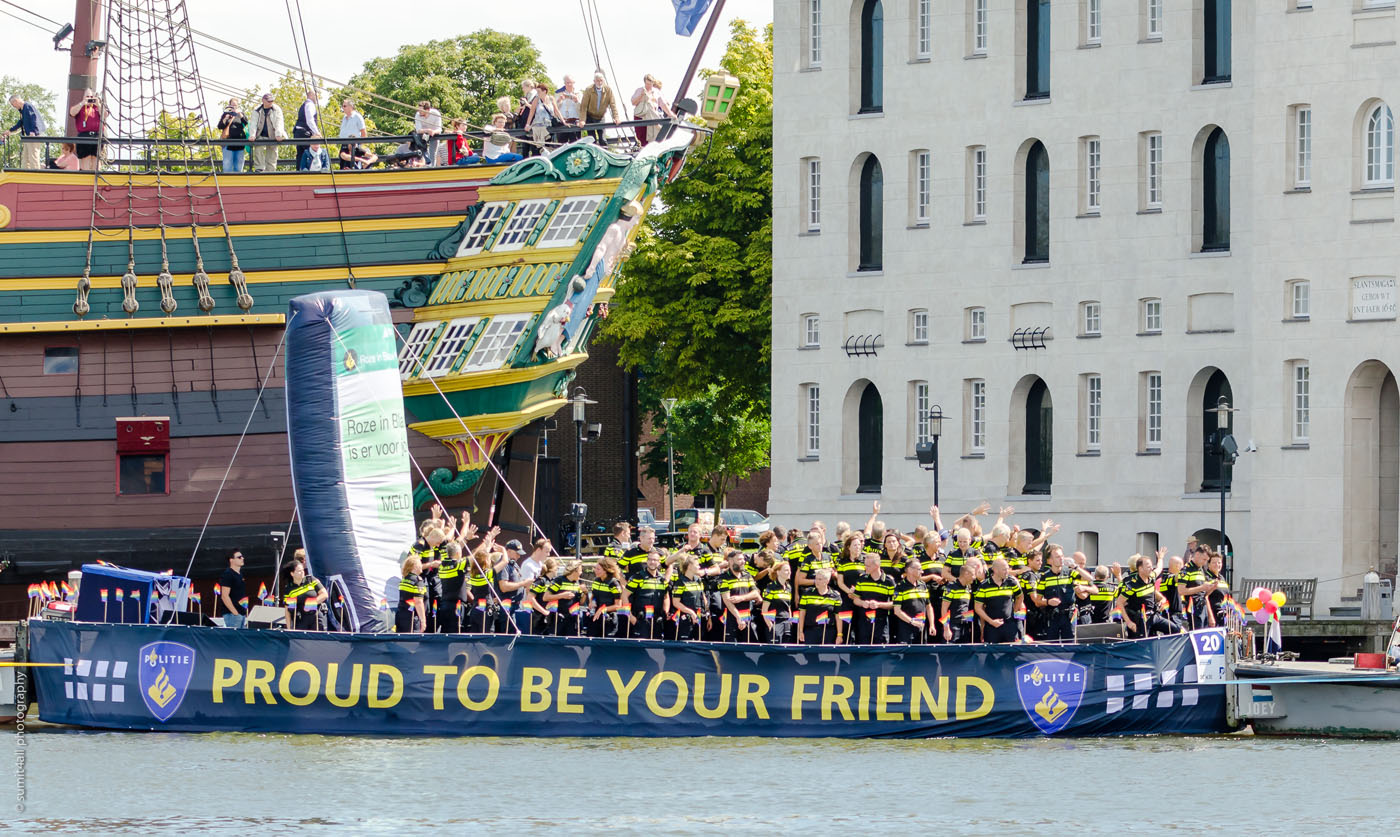 Unlike many other Gay Parades taking place over the world, the Gay Pride Parade in Amsterdam started out in 1996 to celebrate freedom and diversity rather than a demonstration for equal rights. Over the years since its commencement, the Gay Pride Parade sees participation from over 80 boats celebrating the diversity of the country’s LGBT community. The parade highlights the community’s peaceful coexistence and at the same time lauds the tolerant nature of the Dutch to live equally and in an unbiased manner.

The annual Gay Pride Parades that have taken place over the past years have seen boats that support specific causes such as those highlighting the plight of homosexual and lesbian Muslims, a boat supporting teenaged (ages 11 to 17) gay and lesbian along with parents, the ‘Heilig Bootje’ (Little Holy Boat ) carrying gay and lesbian Christians, and many more such boats that feature music and dancers to show their support and highlight their cause.

Participation in the Parade

The Amsterdam Gay Pride Parade sees diversity in participation and the boats that take part are colourful, feisty, and full to the brim with fun. Everyone participates. Apart from the LGBT community one can see participation from the Amsterdam city officials like the Amsterdam City Police, the Ministry of Defence, the Ministry of Security and Justice, Amsterdam’s public transport company GVB, Waternet the water authority, etc. all taking part and having their own boats. The parade also sees participation from several political parties, hospitals and from many Dutch as well as international companies pledging their commitment to tolerance, freedom and diversity.

What it means for me?

Witnessing and photographing the parade over the last few years has allowed me to see freedom and democracy in a totally different light. I must say that witnessing the Gay Pride Parade has opened my eyes and I have seen a world which I didn’t knew existed, or one which I wasn’t willing to see earlier. And I couldn’t be more glad for it. For it has helped me understand who I am and my role in the society better. 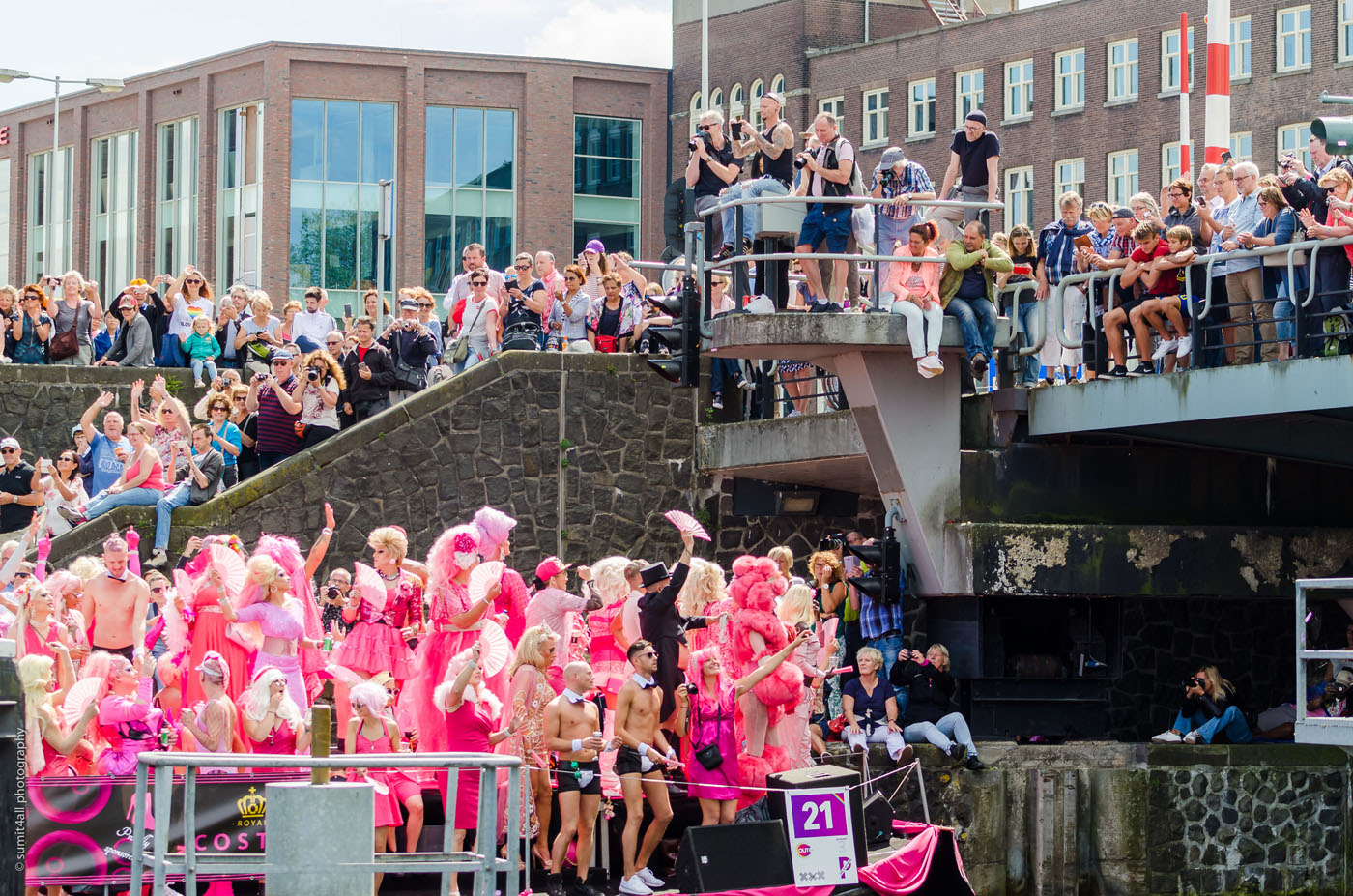 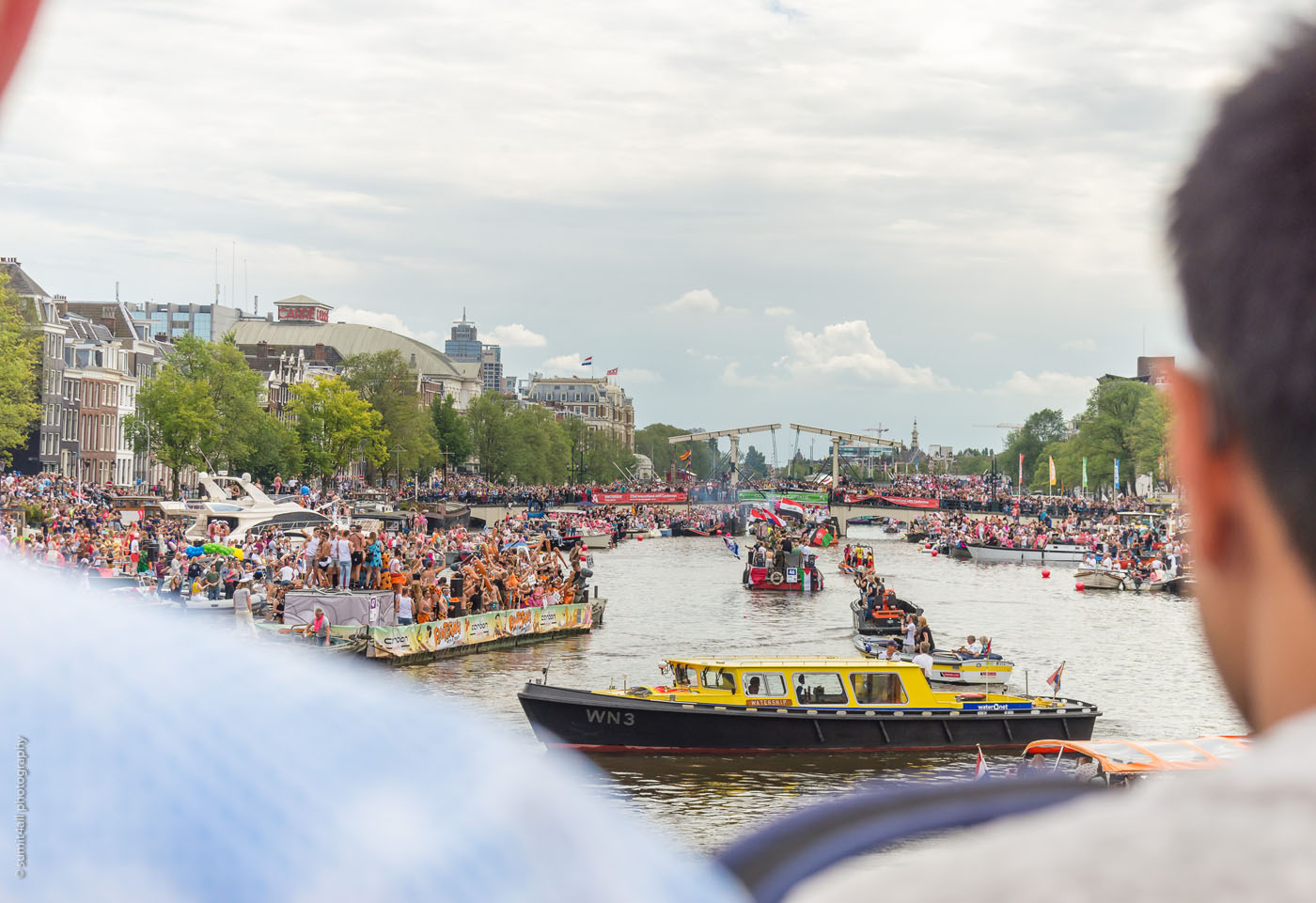 Perhaps the most important participation comes from the Amsterdam Police Force who keep the city’s streets safe daily, and are very friendly to tourists and locals alike. With the sheer large numbers that throng the city for the Parade, it is the City Police that keep the city safe and clear of nuisance. The cheer and applause that all the police boats (yes, there are police boats in the parade too) receive is astounding and heart-warming.

The Parade commenced (in 2017) at around 2:00 pm in the afternoon at beginning of the Prinsengracht at the Westerdok harbour, then passed the Amstel River and the famous Magere Brug – the Skinny Bridge. One can see a number of boats lined up. Many locals are seen on their own boats trying to get a closer view of the parade.

The Parade spans over 6 kilometers and every inch is lined by viewers cheering, dancing and drinking people supporting the boats. Every year the canal is thronged by supporters and finding a good place to view the parade becomes a challenge with people arriving hours earlier to grab the best seats, participate and celebrate the Gay Pride Parade. 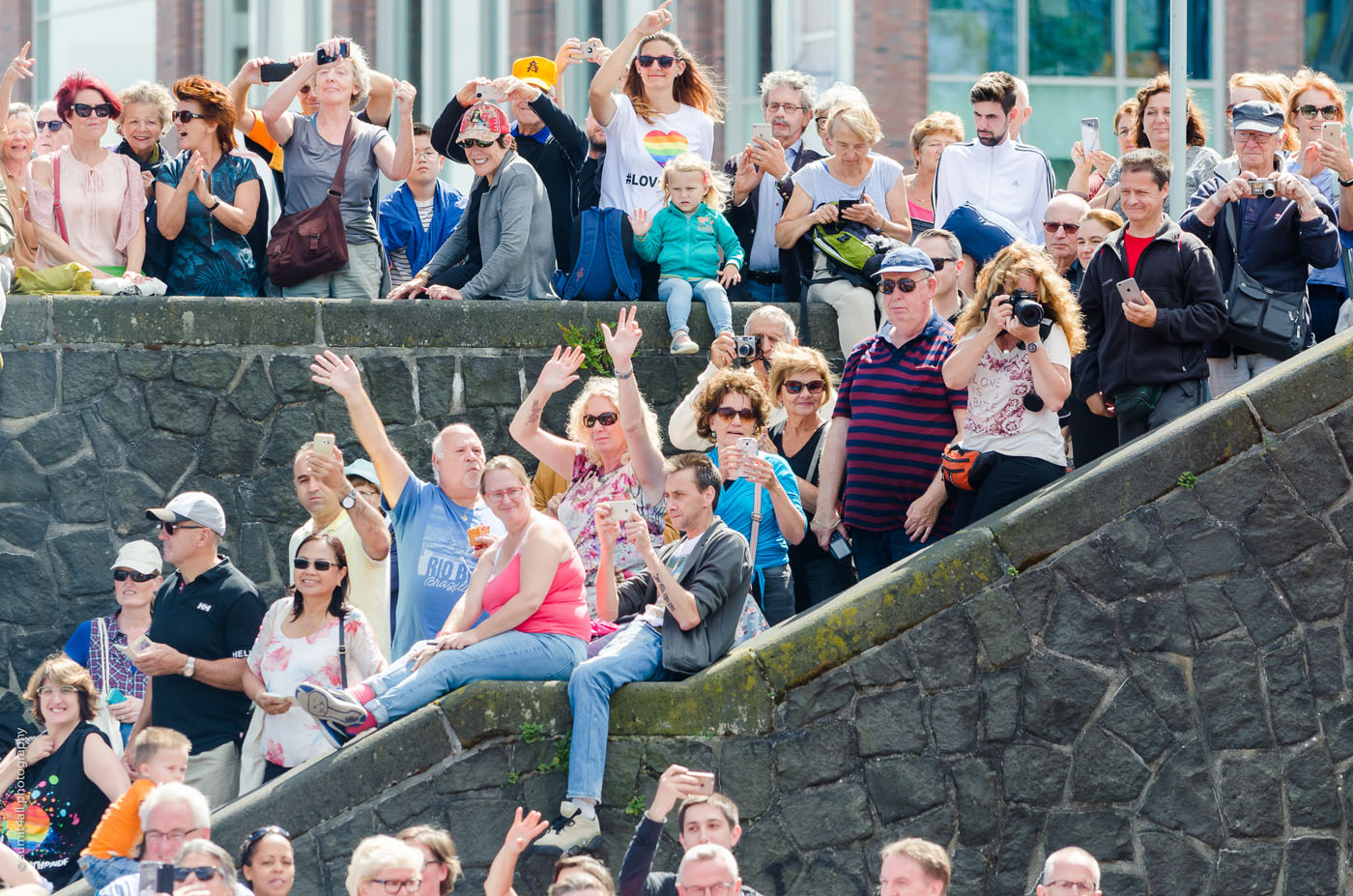 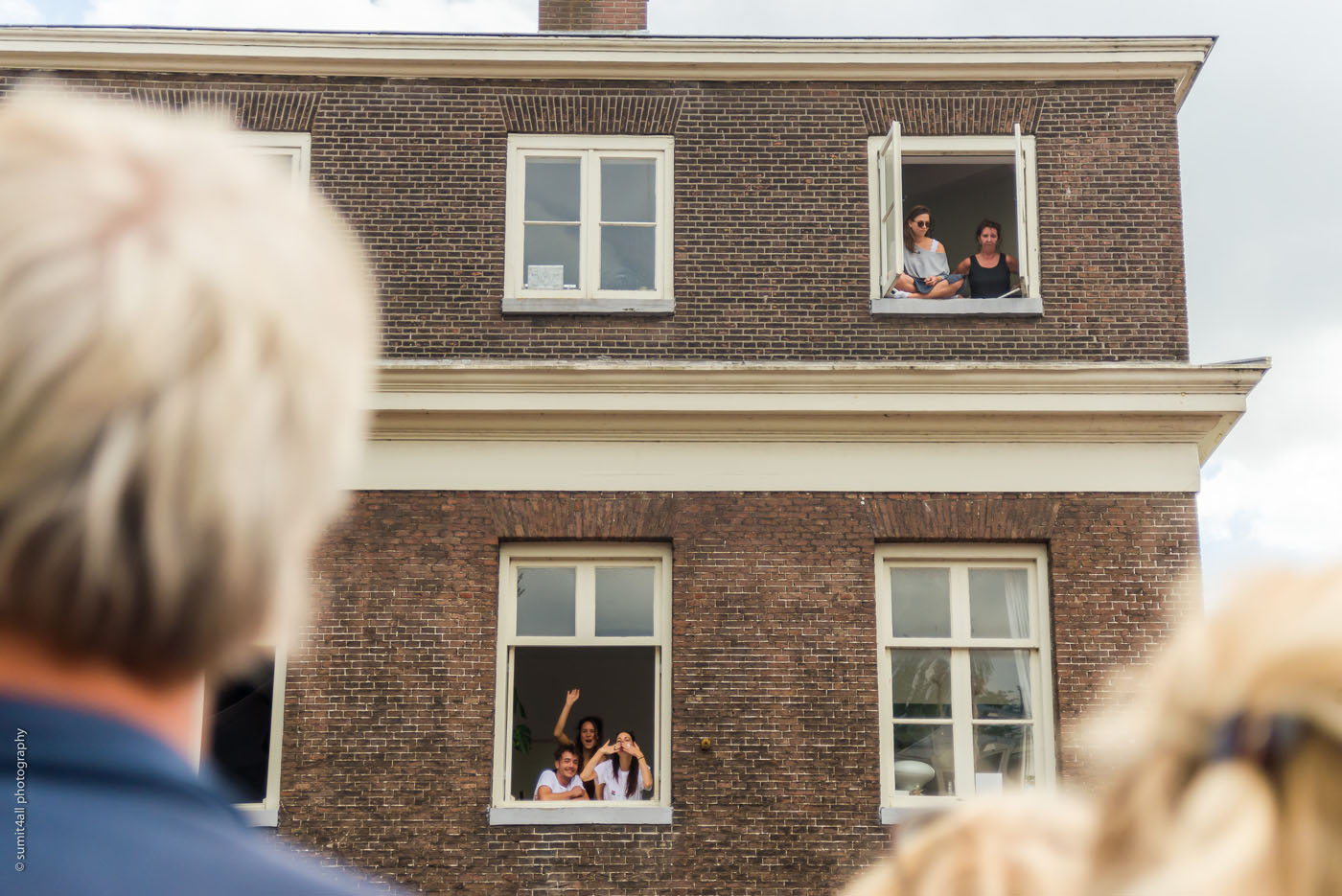 The Enthusiasm and Eagerness

People literally climb over anything to get a glimpse of the Parade. In one of the photos you can see people sitting atop a public toilet near the canal to get a good view. One can see enthusiasts climb over street lamp posts, cars, scooters, trucks parked along the canals, etc.

Many come on their bicycles – Amsterdam’s commuting lifeline – only to ride alongside the route of the parade to see the whole show, though the streets can get extremely crowded along the Parade route.

Apart from the viewers standing alongside the canals, the people living in the buildings lining the canals have the best view. One can see balconies full of supporters of different ages. Right from children to the elderly, all types of people can be seen alongside the canal enjoying the boat parade, the vivid sights and as the Amsterdam official website puts it – a feast.

Many living in these buildings have parties at home, and their friends from all over the country visit just to be a part of the festival. The canal side buildings can be seen draped with rainbow coloured flags hanging from windows and balconies.

This rainbow coloured flag is known as the gay pride flag or LGBT pride flag. It reflects the diversity of the LGBT community and each colour in the flag has a meaning – pink is for sex, red for life, orange for healing, sunlight for yellow, green represents nature, serenity represents blue and violet represents spirit. The gay pride flag has different variations all over the world. 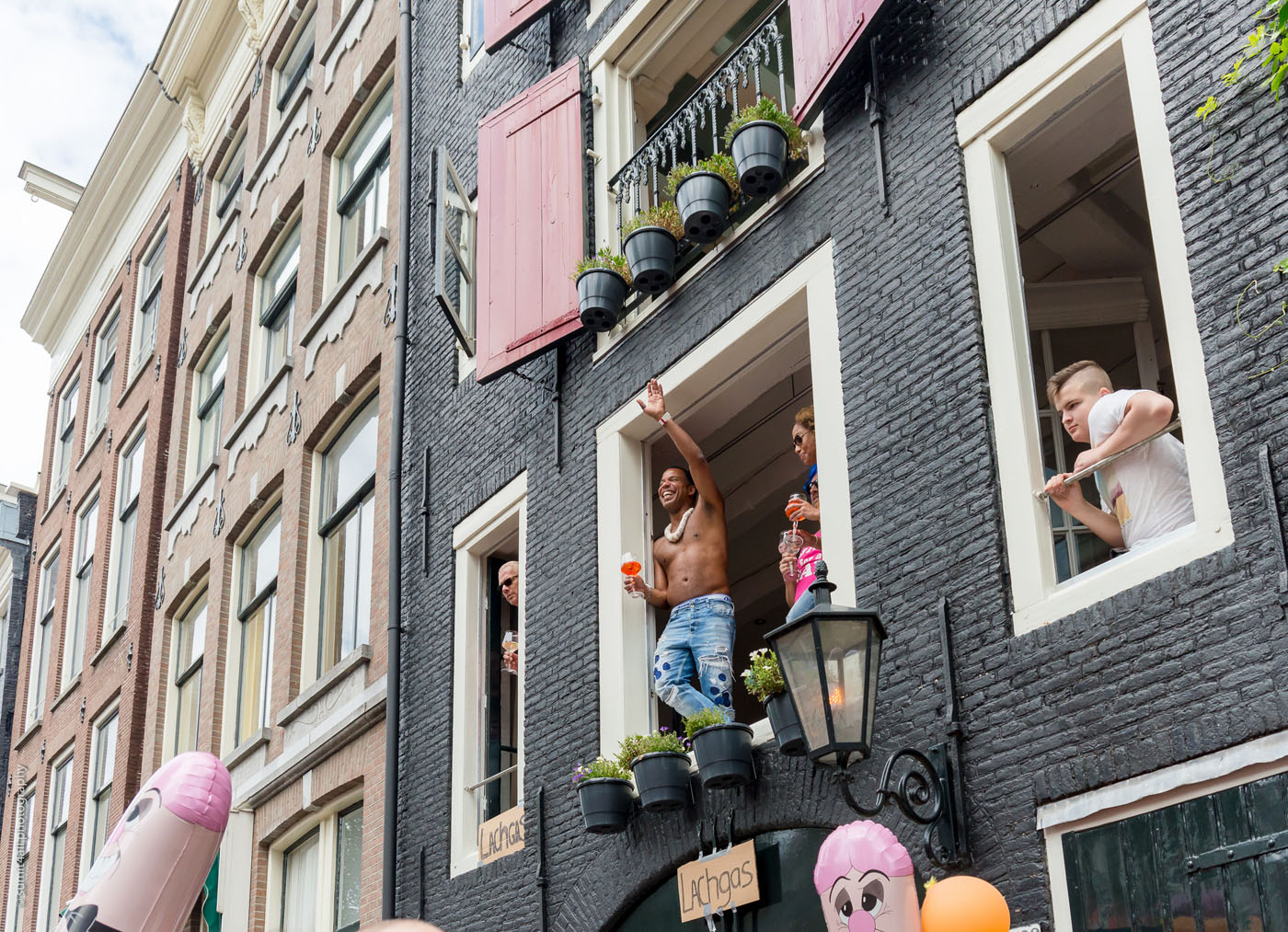 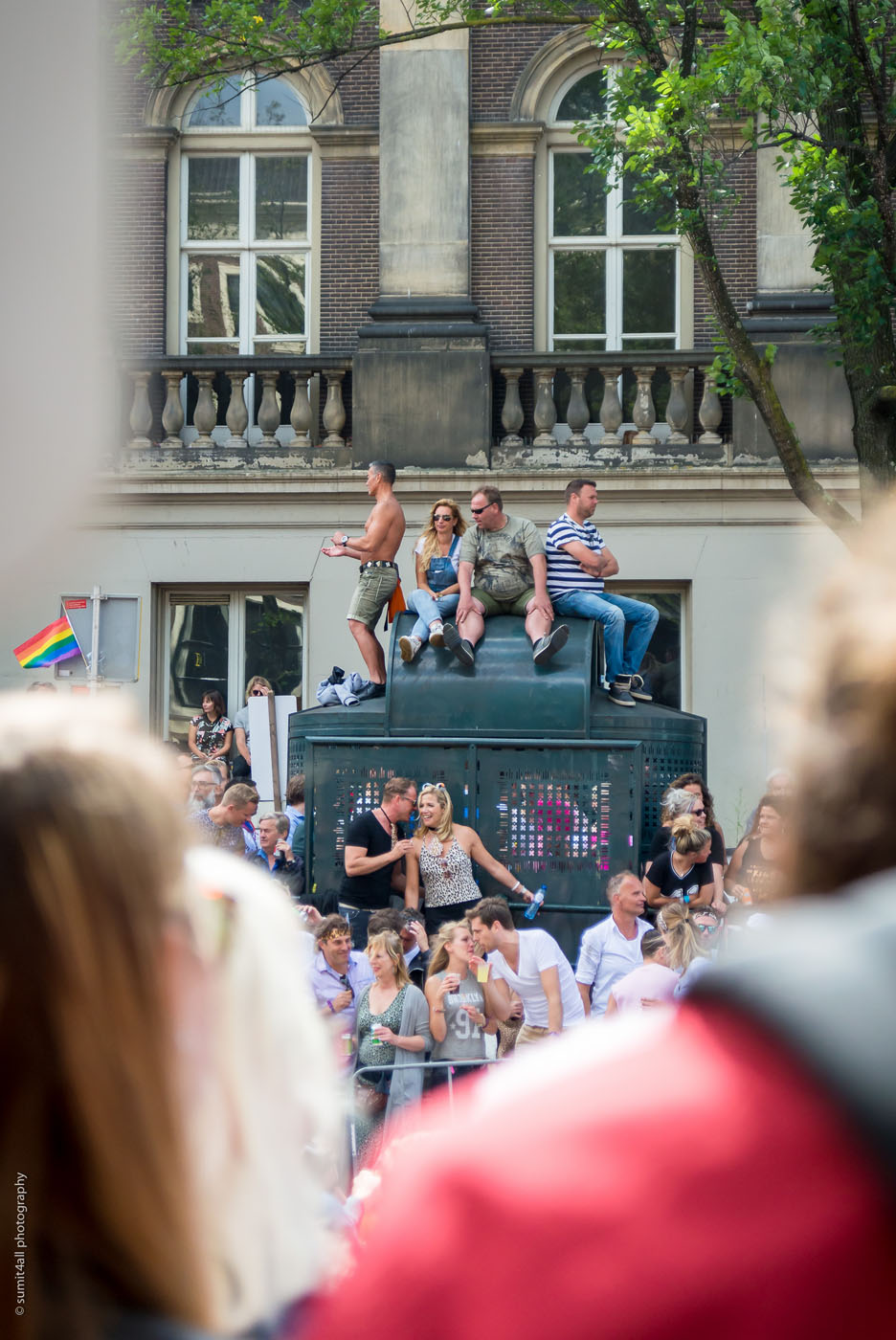 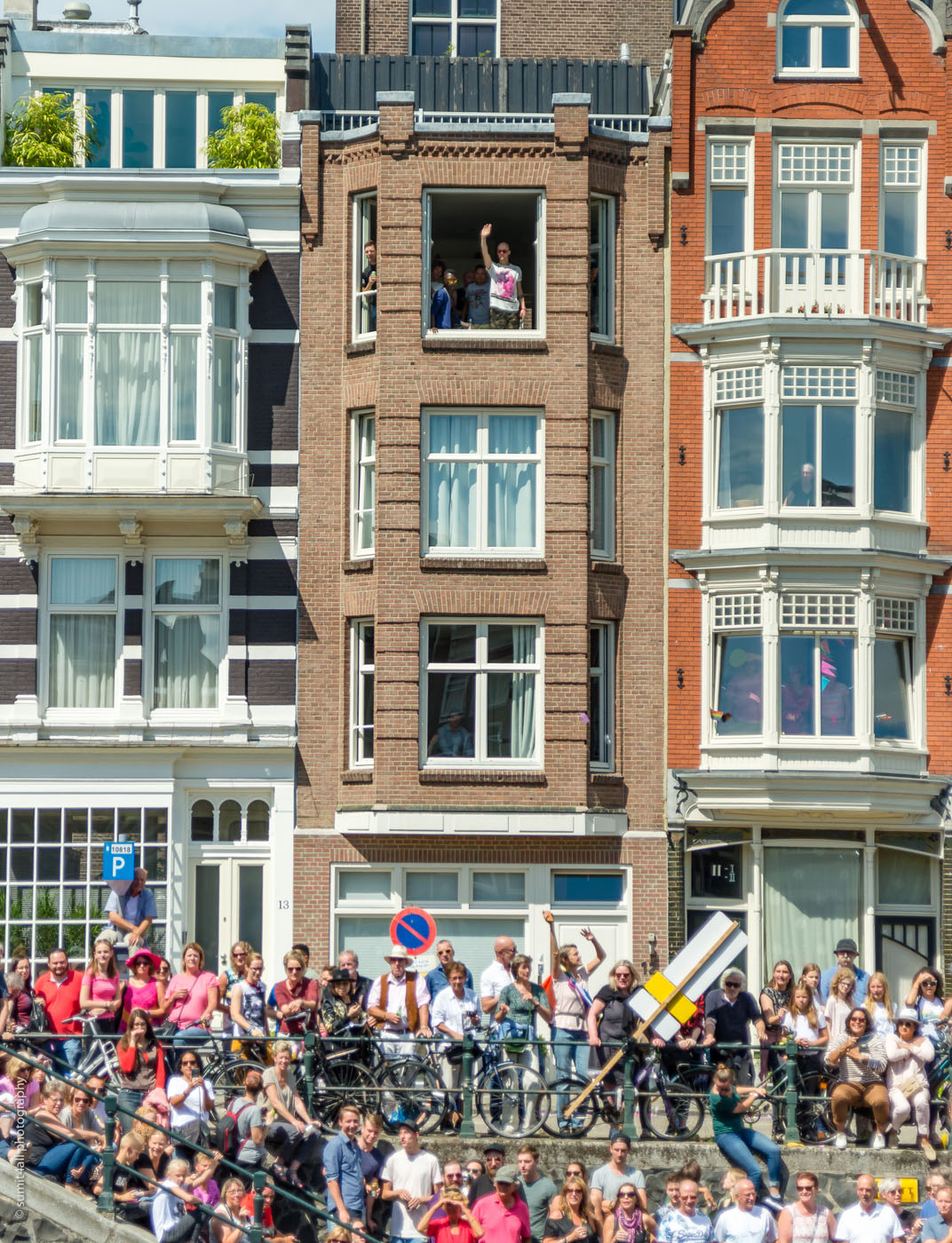 Personally, I prefer shooting events like a parade as it gives me many reasons to gel in with the crowd and take my photos without standing out. Over the years I have photographed the parade from multiple locations, right from the edge of the canals from where you get the best views of the boats passing by.

In 2017, I photographed the parade from the edges – just outside of the main route of the parade. It allowed me to catch a glimpse of people as they took a break from the “real” parade and allowed me to capture some candid shots. I plan to do the same in the next few years as well.

Considering the huge crowds and the busy streets, I know I had to move quickly (and carefully, making sure that my gear is safe). I began with a plan, jotting down the kind of photographs I wanted to capture right from the moment I decided to attend the Gay Pride Parade.

I took two cameras with me with two different lenses. The settings for both the cameras were in place before I left home to avoid wasting precious time in changing lenses during the parade or to keep changing the settings. The Gay Pride Parade is a time bound event, where photography opportunities come and go in the blink of an eye, and I wanted to focus fully on what was happening in my viewfinder and how I compose a photo rather the technicalities of my gear. 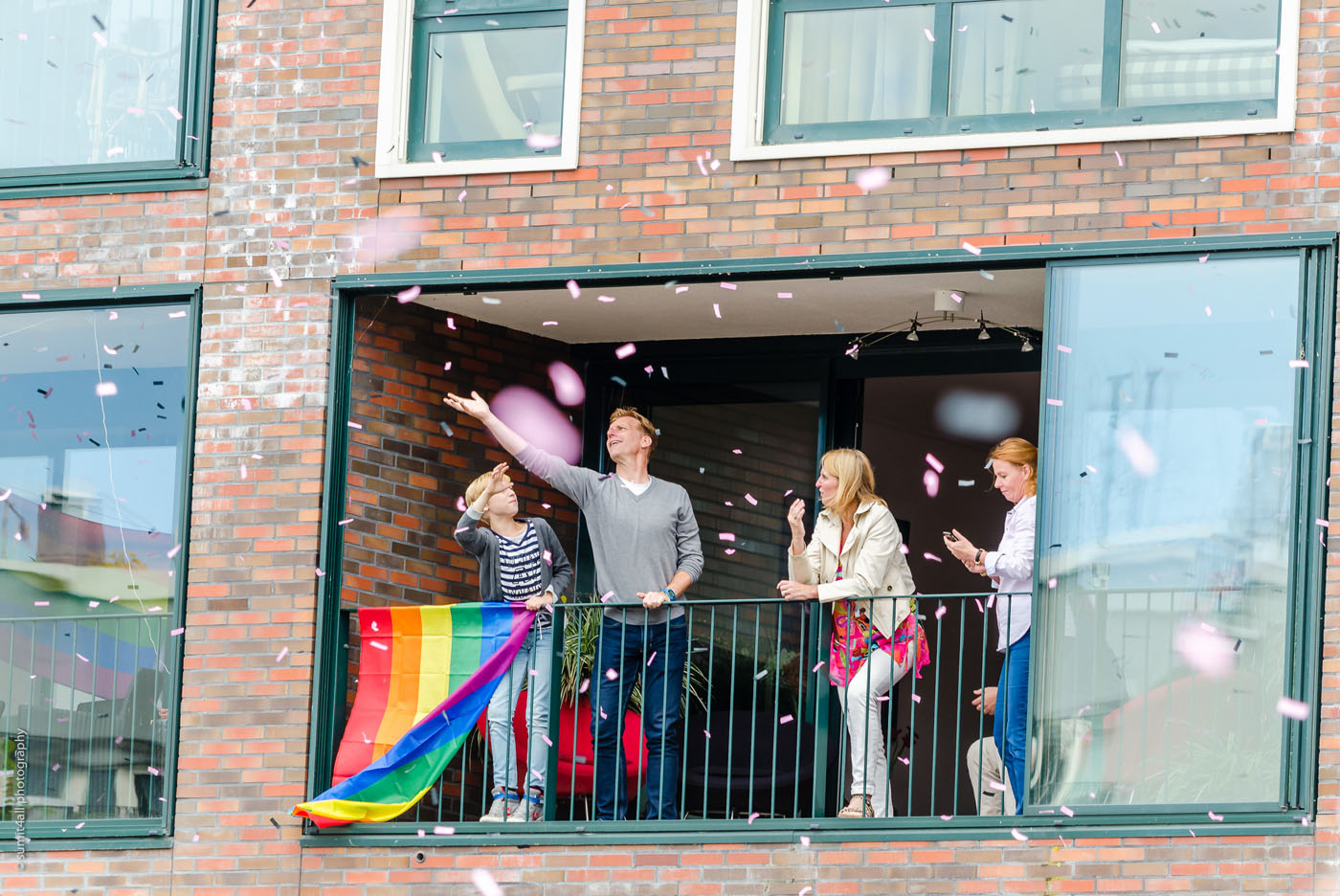 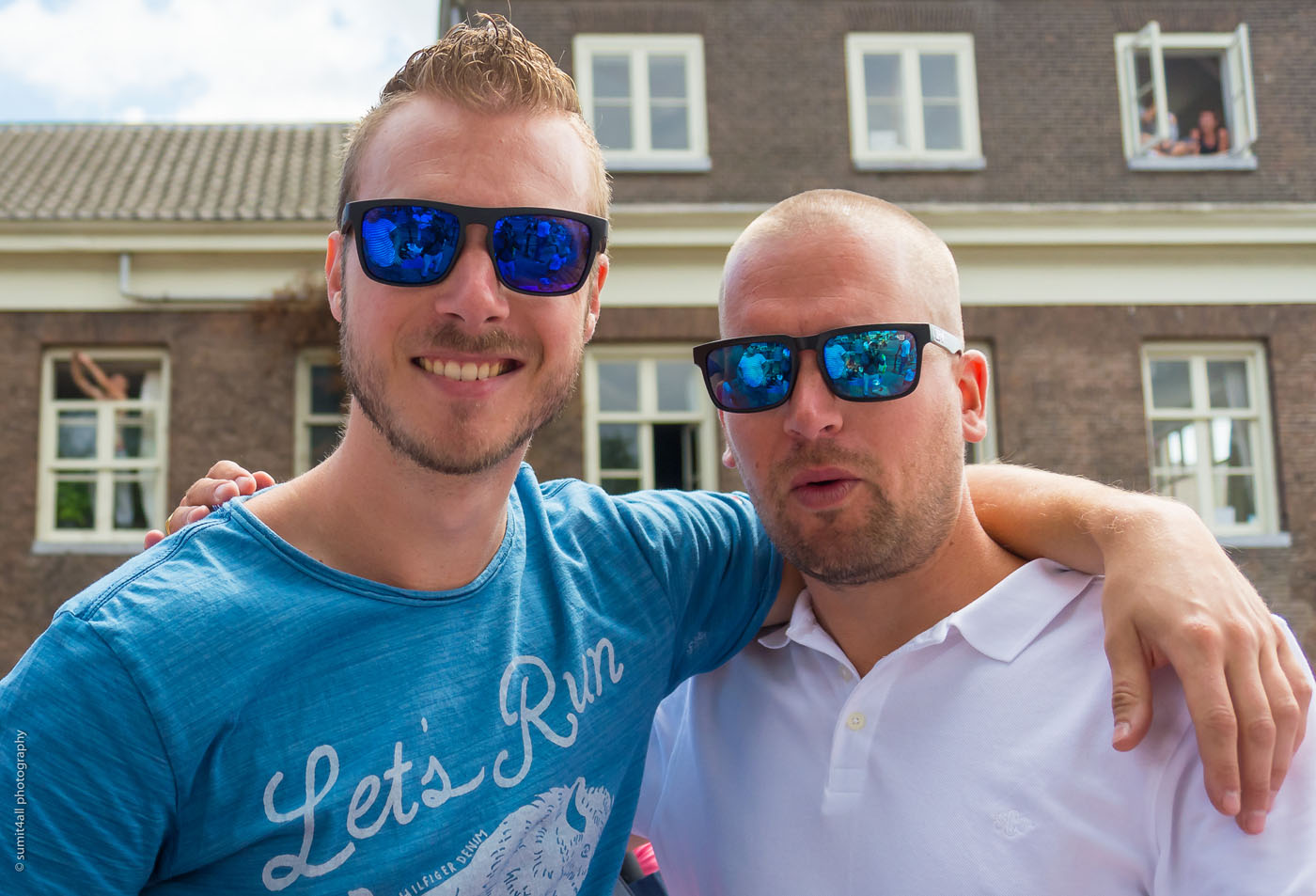 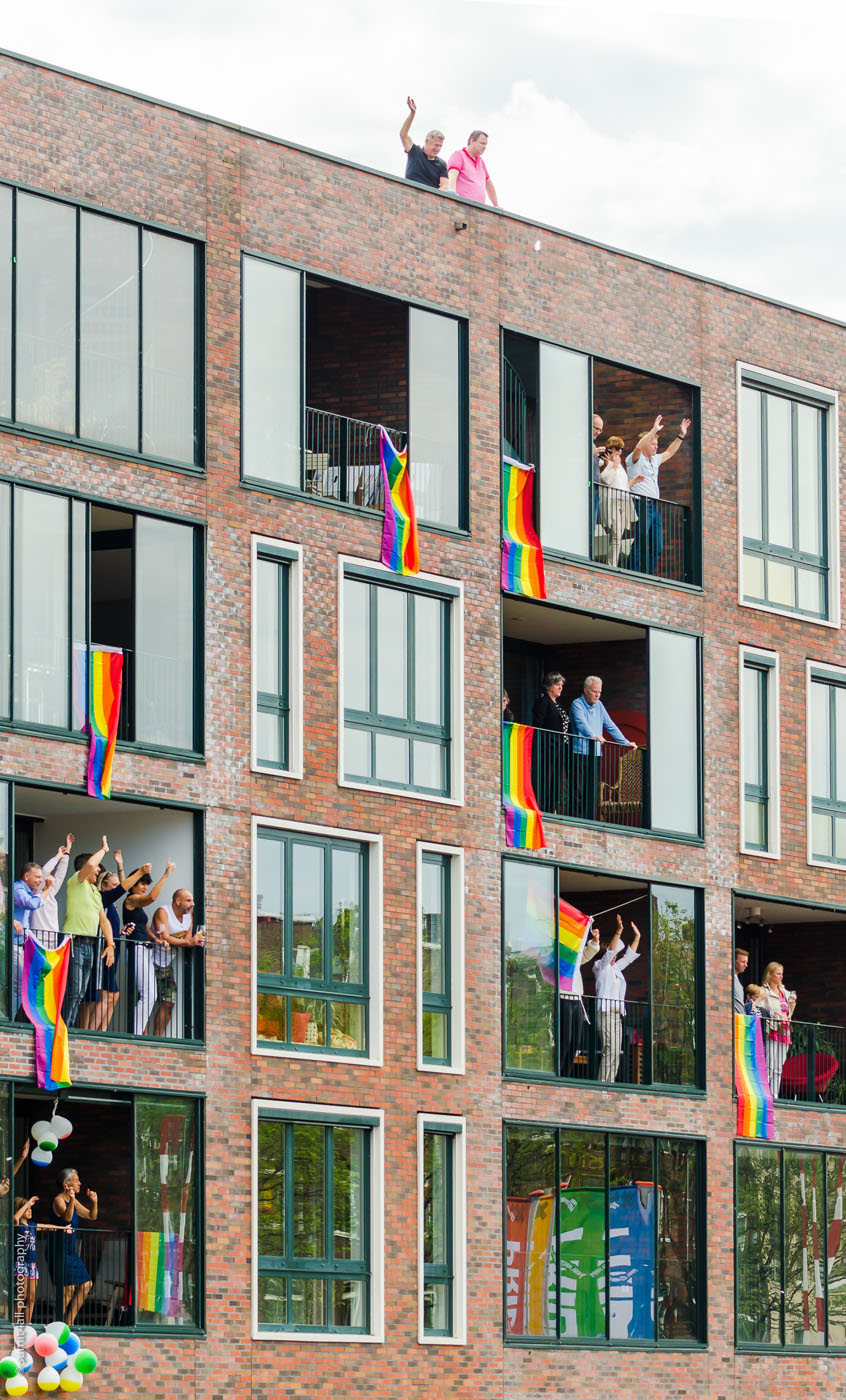 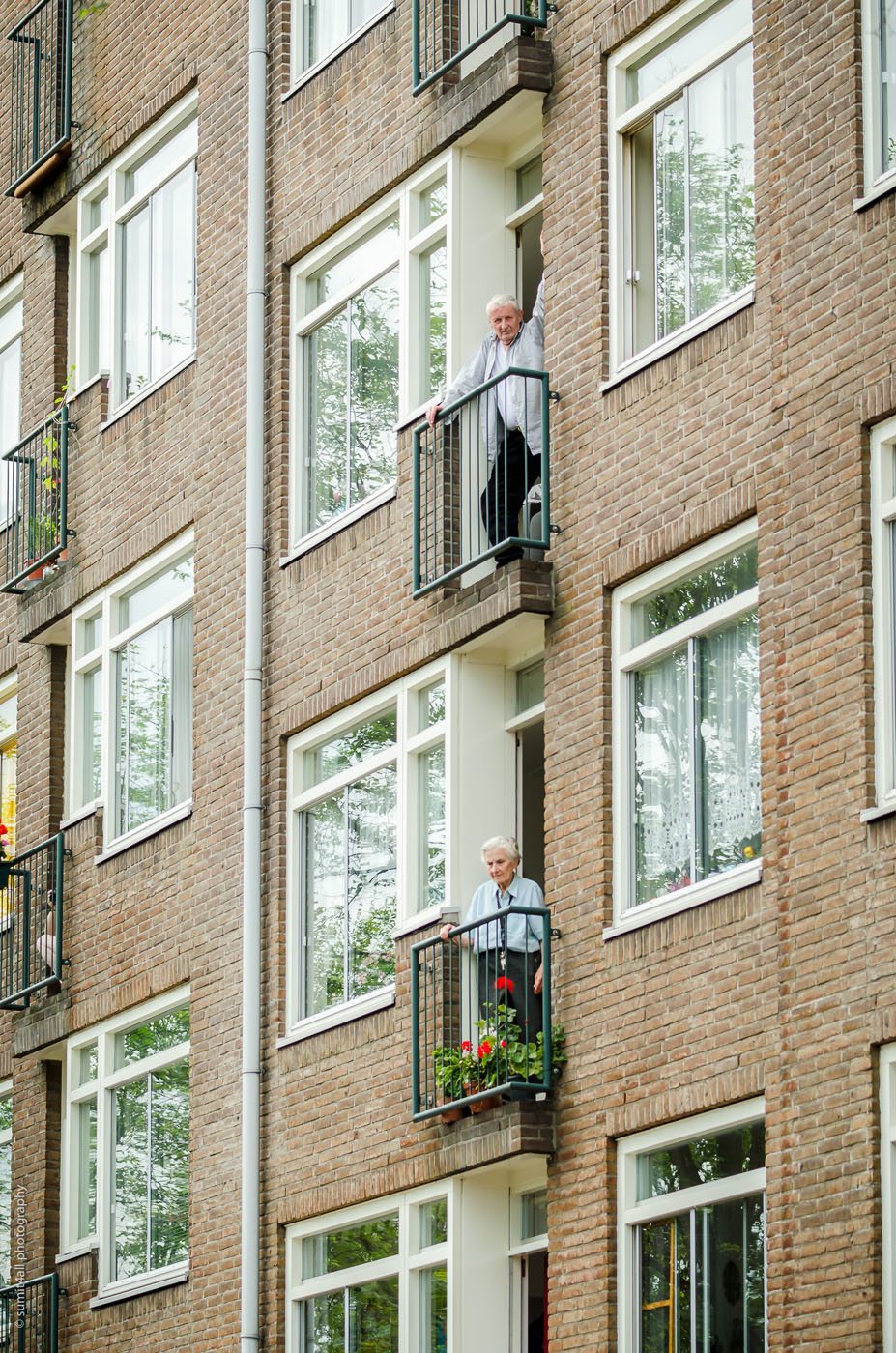 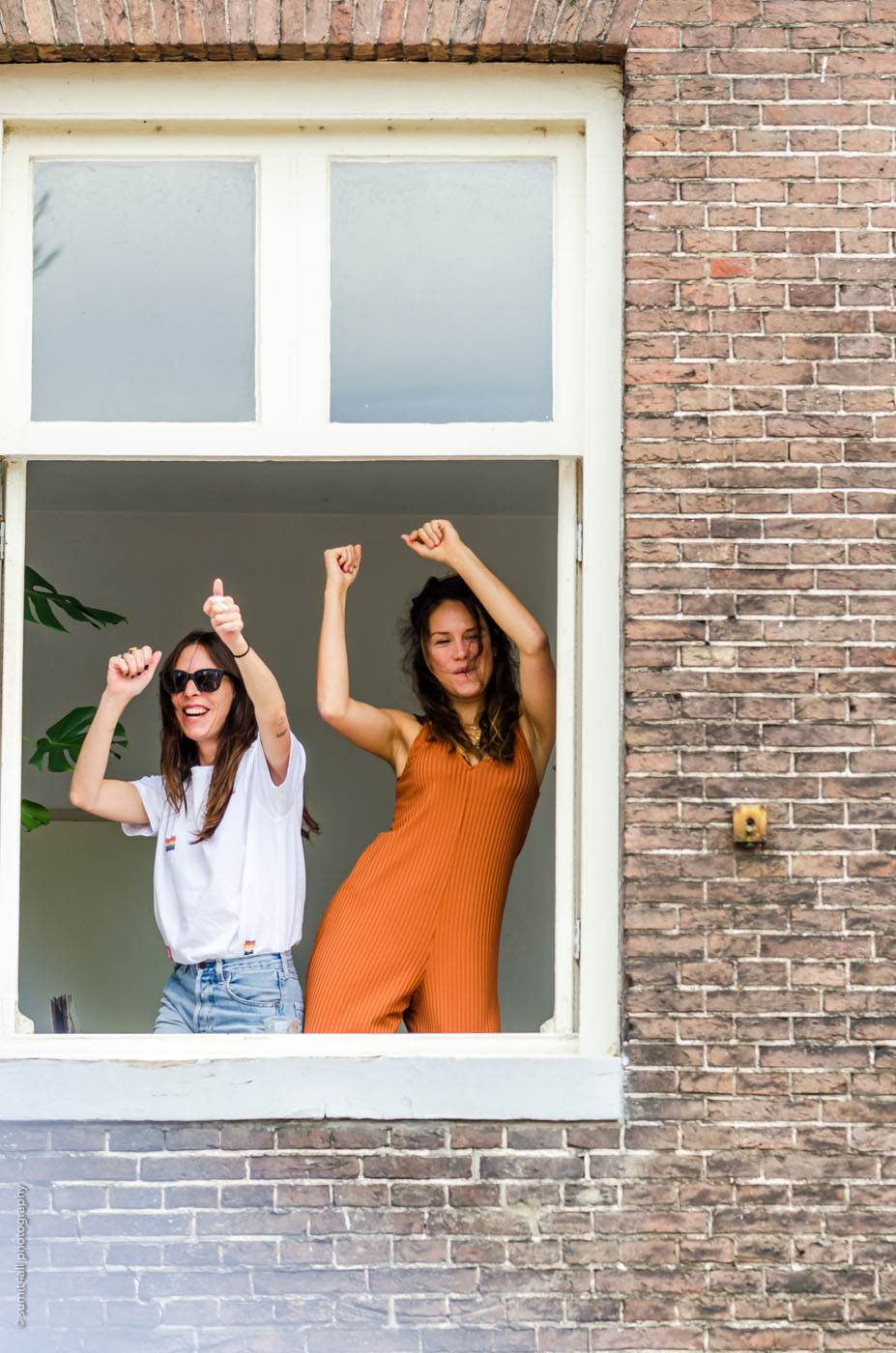 The above photograph is a perfect example of a well-timed shot. These ladies were totally oblivious to the fact that I was capturing their joy and their zest for celebration. Had I not been prepared with my cameras, I would have completely missed the opportunity to get them in their moment of fun.

While I managed to capture a vivid, colourful representation of the Gay Pride Parade, and the beautiful people participating in it, I also garnered more respect for the people that I am surrounded with, and the life they live – free of prejudices and welcoming one and all despite our natural differences and diversity.