A Weekend In Zurich Along The Limmat River

I visited Zurich at a time (October 2016) when winter was just starting to add in its natural filters of misty blue and white. The atmosphere was perfect and the architectural beauty of the city, along with the serene Zurich Lake and the Limmat River originating from it, created abundant photographic opportunities. 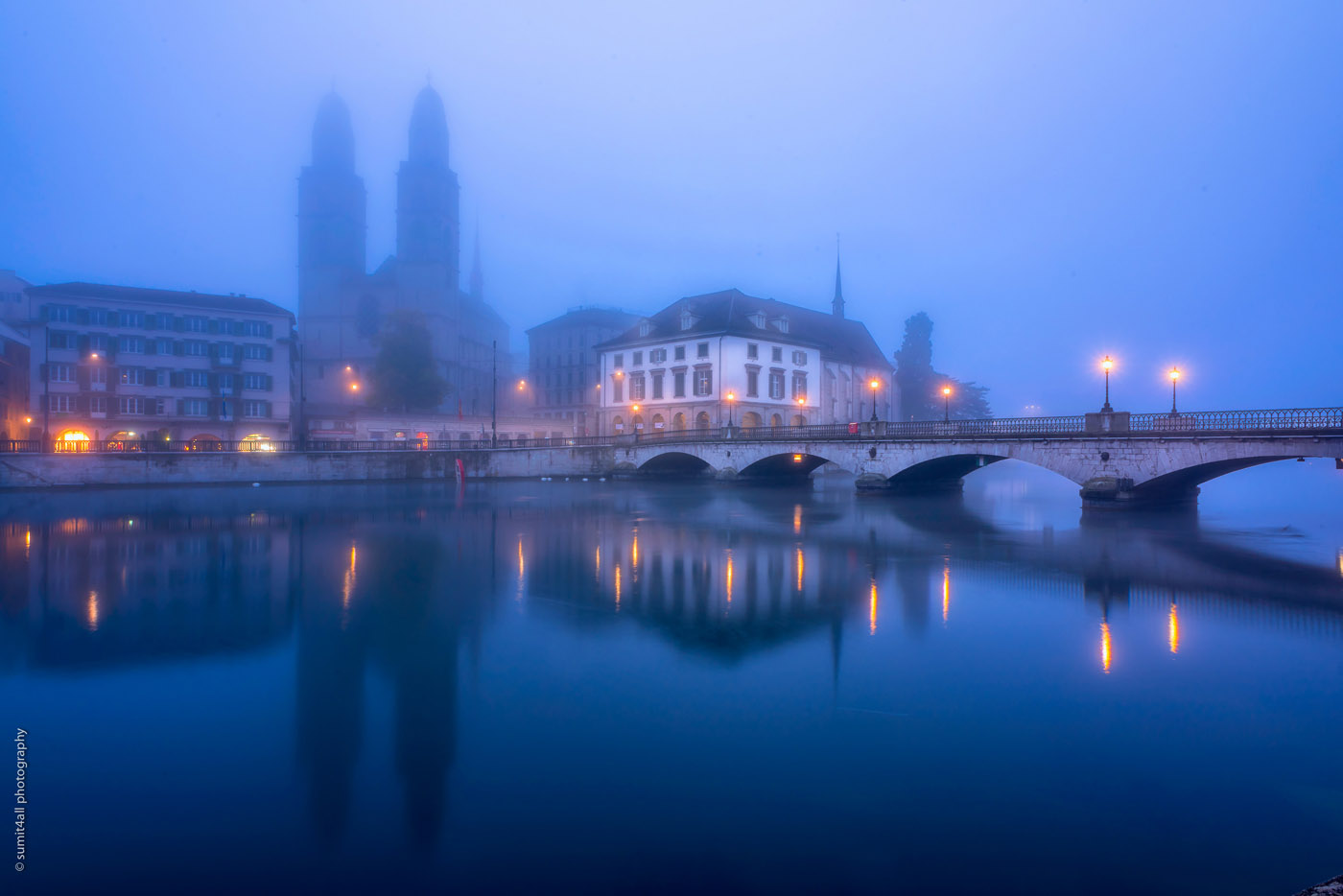 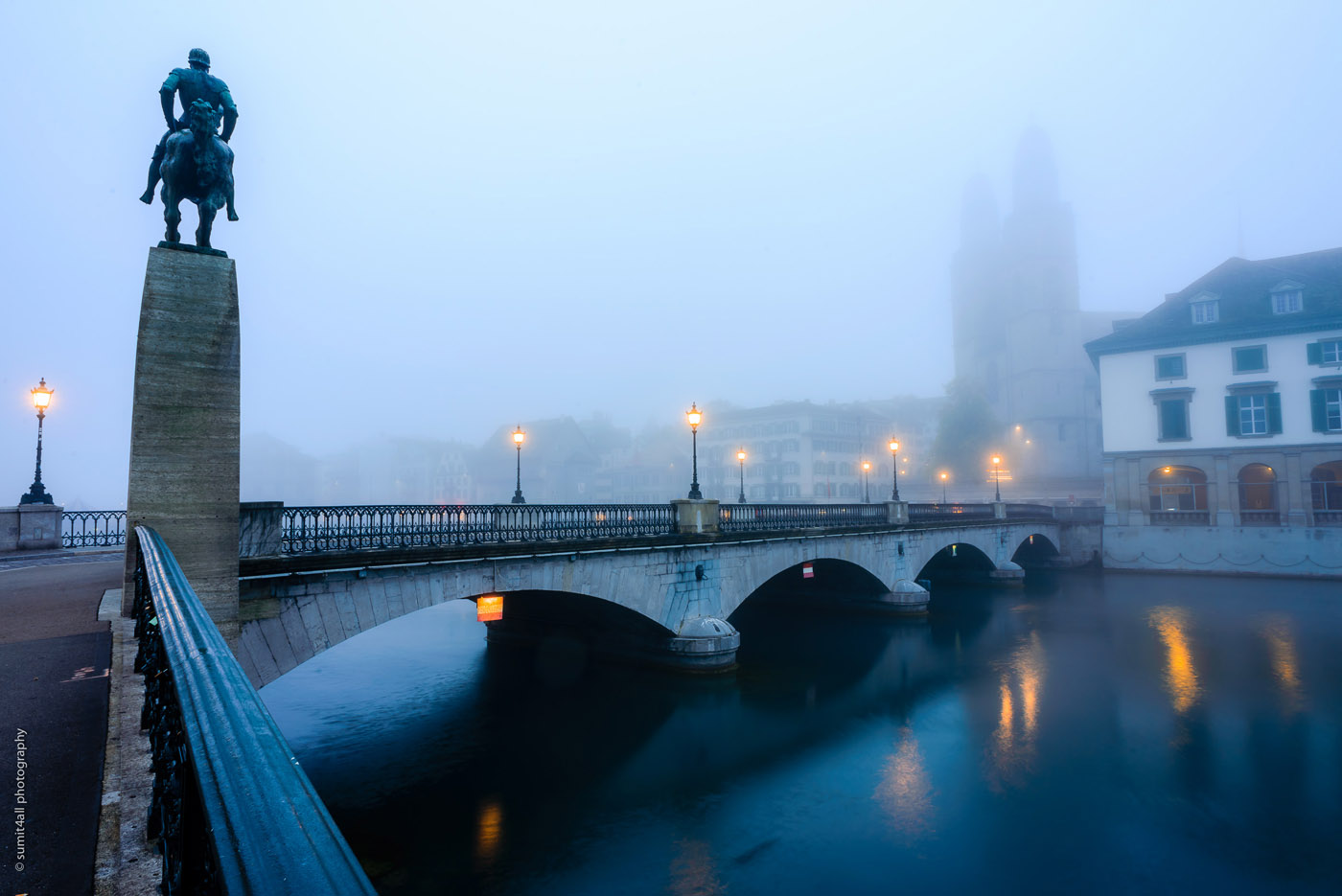 My journey began at 5 am and I was greeted by mist and fog in the city. (Yes, being a travel photographer is not as fun as it sounds.) While I had earlier decided to venture out a little later in the day, the blue misty aura was too beautiful to resist and I set out to capture the beauty of Europe’s financial capital. As I walked along the edge of the river, I started composing from different angles – a task that was no lesser than a small workout!

My travels can hardly be categorised as vacations. Most often, they entail getting up early for sunrise shots, finding picturesque locations atop towers and hiking up hills for breath-taking view-points, spending the day amongst other tourists as well as locals finding out about the history of the place and understanding the lifestyle of the locals, and then going to one of the chosen locations for a couple of hours to make a sunset cityscape photograph. 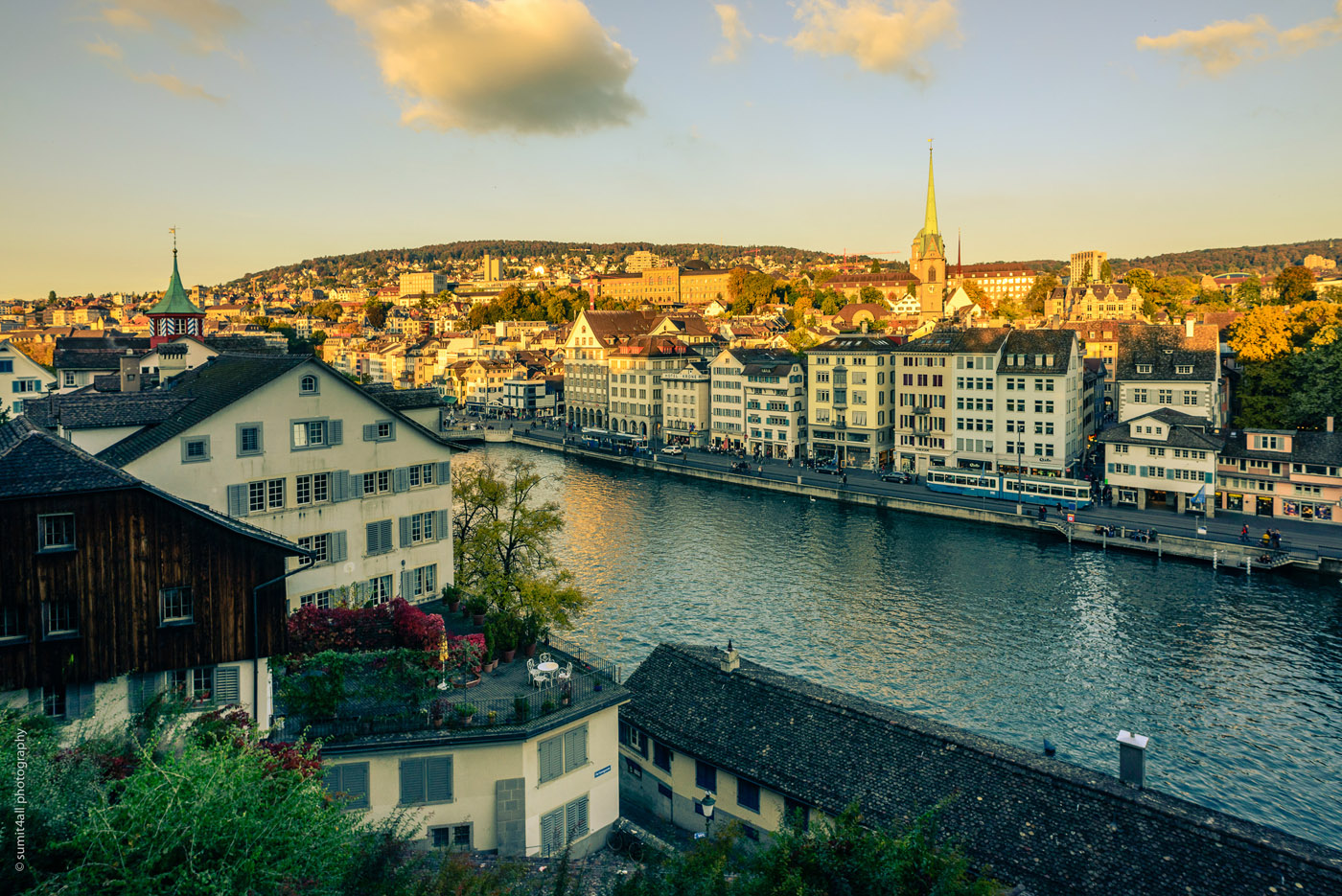 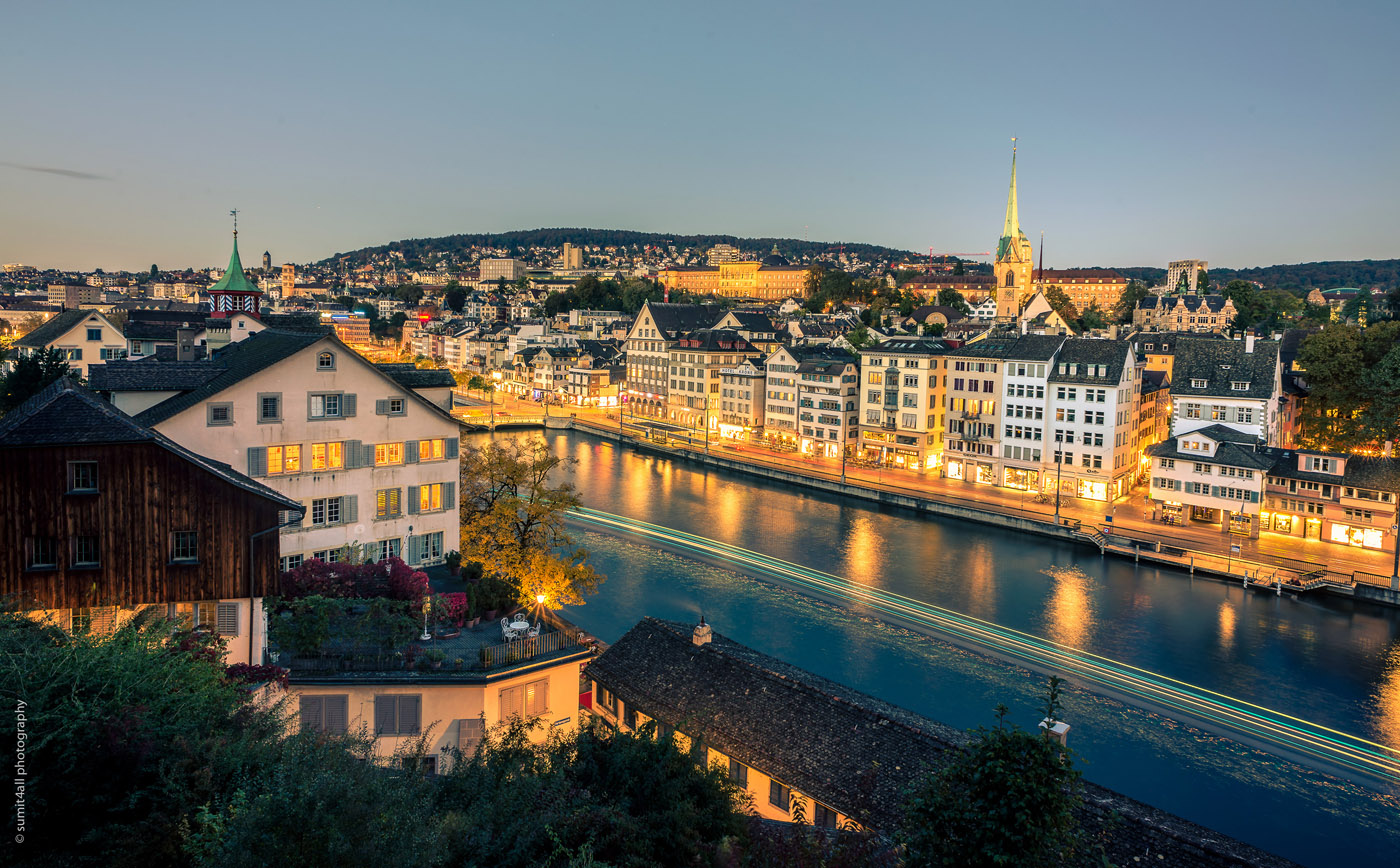 Zurich is a treat full of postcard locations. Right from the Swiss Alps and their reflection that can be seen in the water, the river that silently make its way through the city, the Baroque architecture that adorns the banks of the rivers, narrow cobbled streets, and the coloured guild houses, all add to the experience.

I took the above photograph from the Lindenhof hill, a small hill within the city providing wonderful views of the city. I shot this photograph just as the last rays of the setting sun set the top of the city ablaze. The fiery golden hue is one of the reasons that sunset is my favourite time to photograph a city. I often arrive about two hours before sunset on good spots like these to setup my tripod and camera and be ready for the best shot.

In crowded locations, I have missed a few photographs because there was another photographer ready with his tripod before I arrived at the scene. Hence it is always better to be well prepared and arrive earlier. It’s as simple as “The early bird gets the worm.”

My second favourite reason about photographing sunsets is to see the artificial lights come up, and the effect they have on the same cityscape that was just a few minutes earlier lit up by the natural sunlight. In the second photograph above, I have used a long exposure to smoothen the water in the Limmat River. You can also see the streaks of light from some boats passing by in the river that look like sprinkles of gold in the water.

Just staying at one place and making photographs is also something I like. As I look at different people coming and leaving, after clicking a few selfies, I realise the fickleness of life, and also how much each beauty is in each moment. Seeing the sun set over a city as the light changes from blue golden sunlight to the contrasty street lights is an experience in itself. 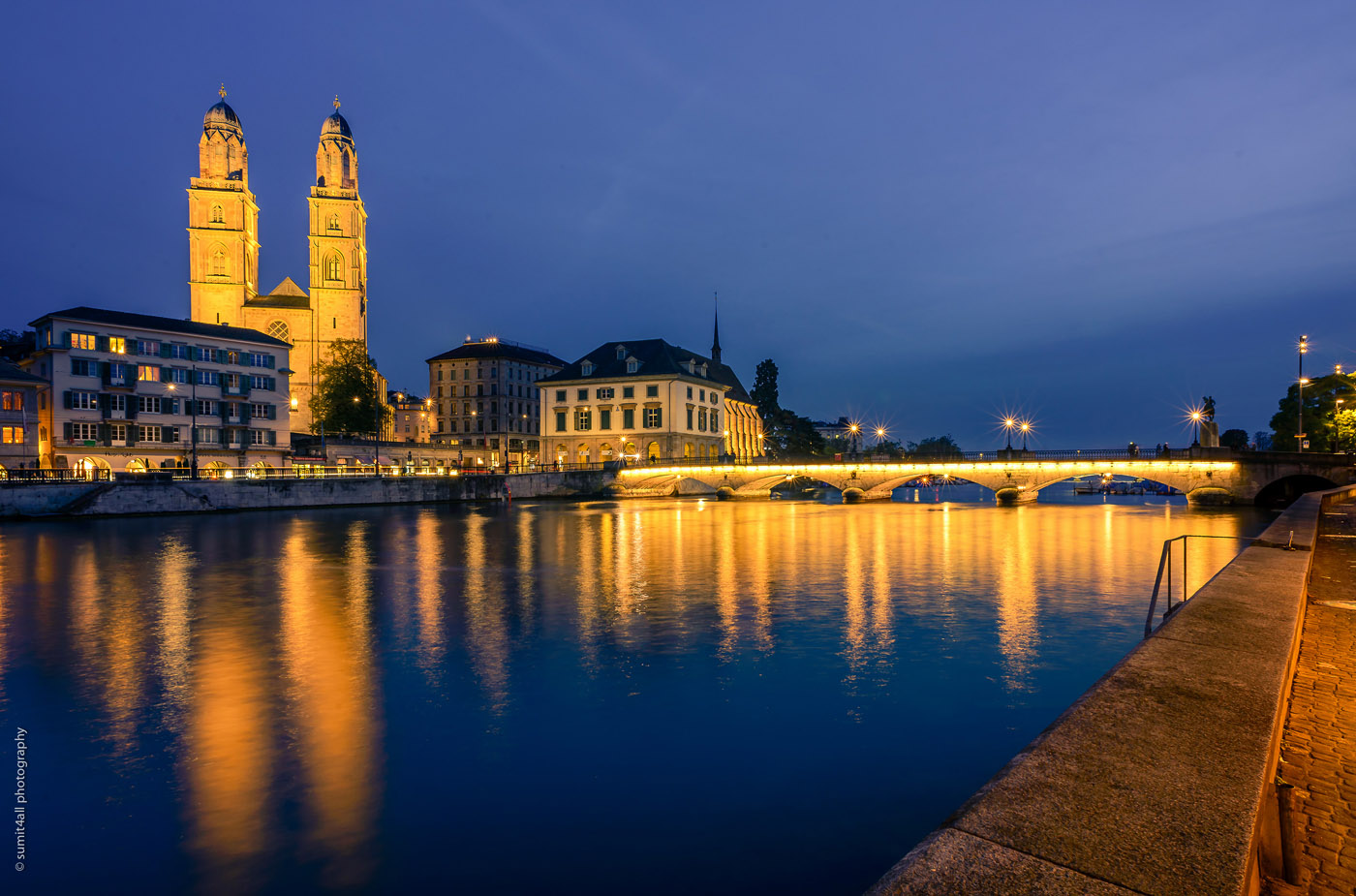 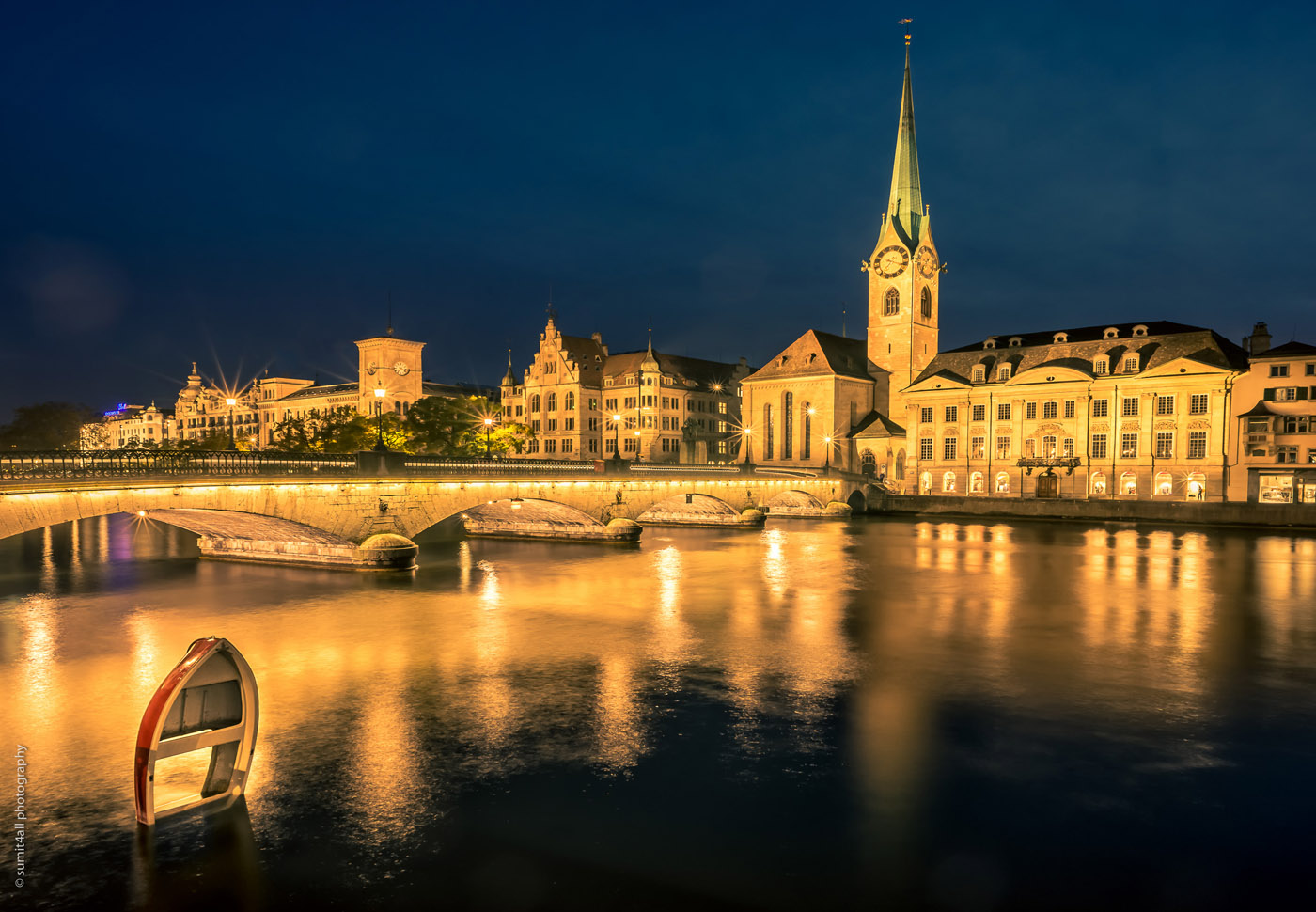 I usually do a little bit of homework by researching on google maps, and other photography websites like 500px.com, Flickr.com, Instagram before I set out to shoot to find the best spots in each city. It helps me save time when I am actually in the city so that I can focus more on experiencing the unique vibe of the city I am visiting.

No visit to Zurich is complete without seeing the twin towers of the Grossmünster church, which is one of the most prominent tourist attractions in Zurich. As the sun sets, the blue sky and the yellow reflection of the artificial night lights are in perfect contrast with each other.  I tried to capture the same as I photographed important locations like the Fraumünster church. In the above photograph, I chose to include the boat in an awkward position in the waters to make the composition unique and different. 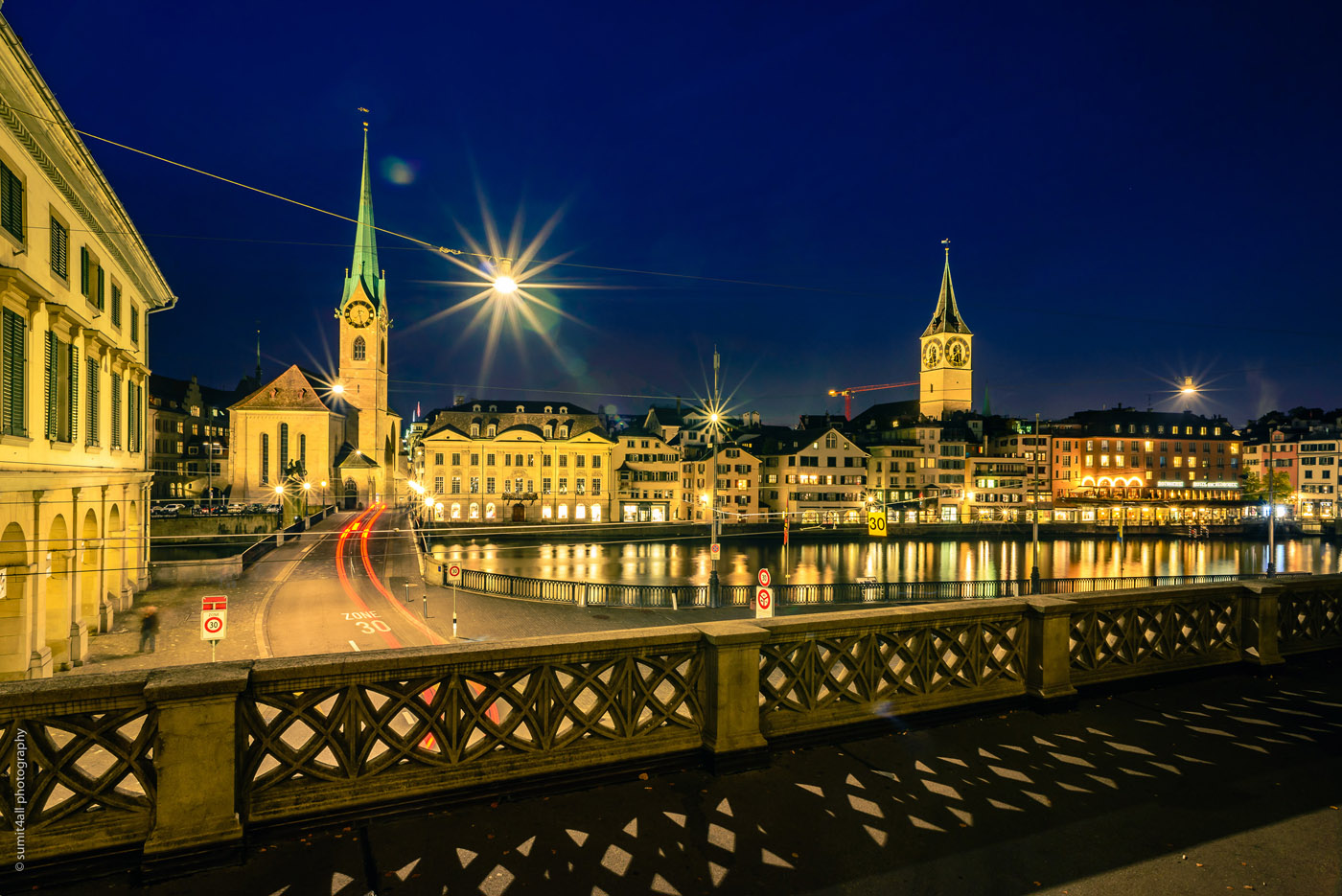 Similarly, in the above photograph I composed the Fraumünster church on the left and the St. Peter church on the right during the blue hour, just after the sunset but before the sky goes completely black. Choosing to compose this photograph during the blue hour was to amplify the effect of the golden yellow reflections of the light on the buildings that were in contrast to the deep blue sky.

My focus on shooting mostly during the early hours and during the sunset has given me some of my best photographs. While this was a short weekend trip to Zurich it has been one of my most memorable trips. A longer visit is surely on the cards!