I fell in love with the city of Barcelona in 2015 when I first visited it after moving to Europe. There are beautiful beaches, awesome weather (especially in the winters which I believe is the best time to visit the city), spectacular sunrises and sunsets, picturesque sights in a well planned and managed city, modern architecture with a perfect mix of gothic structures, and of course, Antoni Gaudi’s marvel – The Sagrada Familia.

Mesmerized by the wondrous sights of Barcelona, I couldn’t resist the temptation and returned for another visit in 2017. Once again, I chose to visit in the month of February, when I found the weather perfectly complimenting my need for shorter days to avoid getting up too early for a sunrise shoot or sleeping too late after photographing the sunset. The highlight of both my visits to the city, however, was a chance to see the Sagrada Familia ! 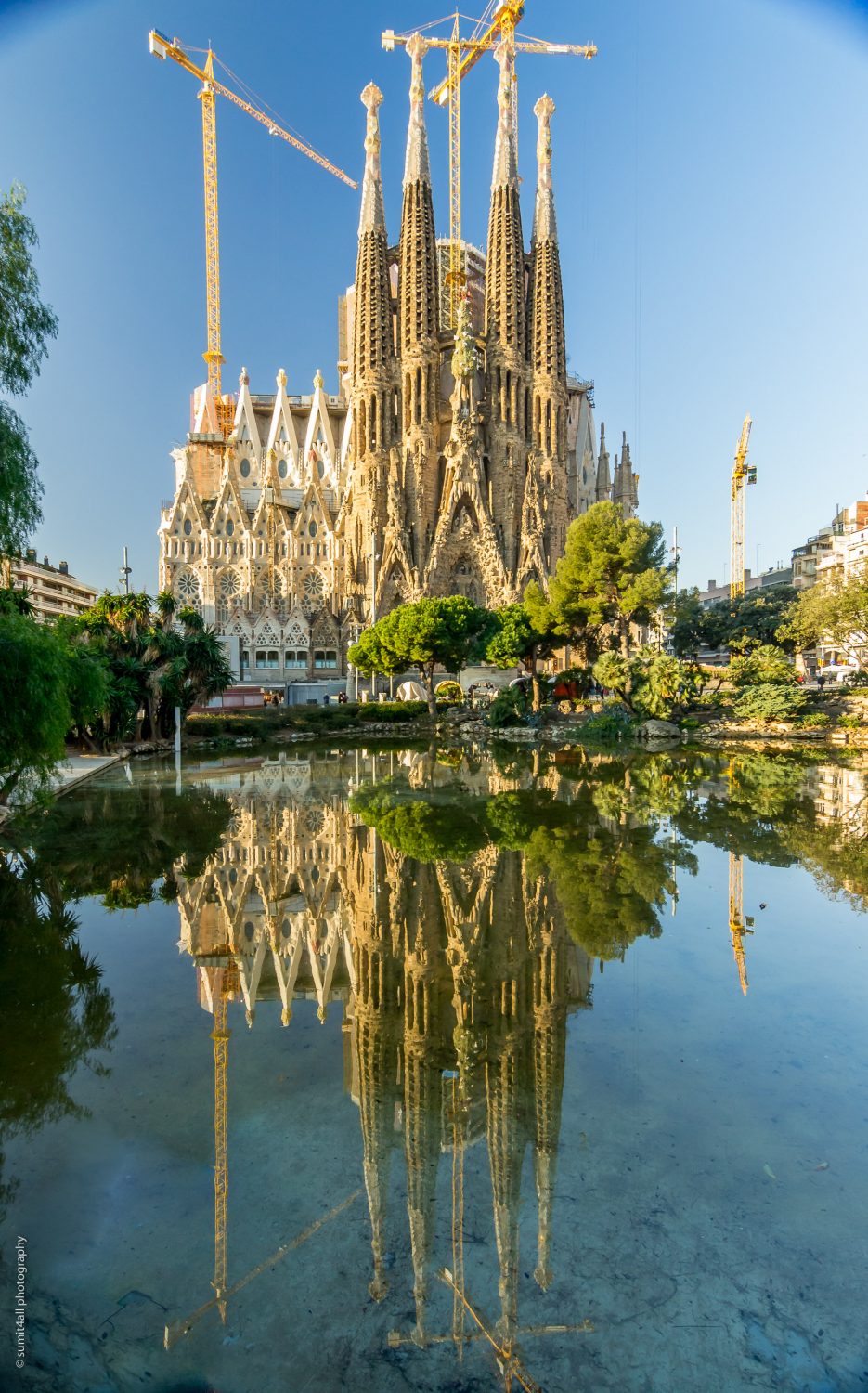 The Sagrada Familia, a large Roman Catholic Church has been under construction from 1882 (no, it is not a typo), more than a hundred years ago. Built in the shape of a Latin cross, the gothic church is an architectural marvel. Now deemed a UNESCO World Heritage Site, the Sagrada Familia is touted to be the largest church building in the world after completion.

Antoni Gaudi (1852 – 1926), the Catalan architect devoted a large part of his architectural life to the Sagrada Familia. As the chief architect, Gaudi took over from Francisco Paula de Villar in 1883, who started the project in 1882 and resigned a year later. Gaudi’s engineering and architectural style can be clearly seen in the Art Nouveau and gothic style construction.

At the time of Gaudi’s death in 1926, work on the Sagrada Familia had not even reached a quarter of the project’s design. The financial funding of the church has been solely through donations and the slow progress through the century was interrupted by the Spanish Civil war. It passed the midpoint of its construction in the year 2010. In the same year, Pope Benedict XVI consecrated it and proclaimed it a minor basilica. The world anticipates its completion in 2026, Gaudi’s death centenary. 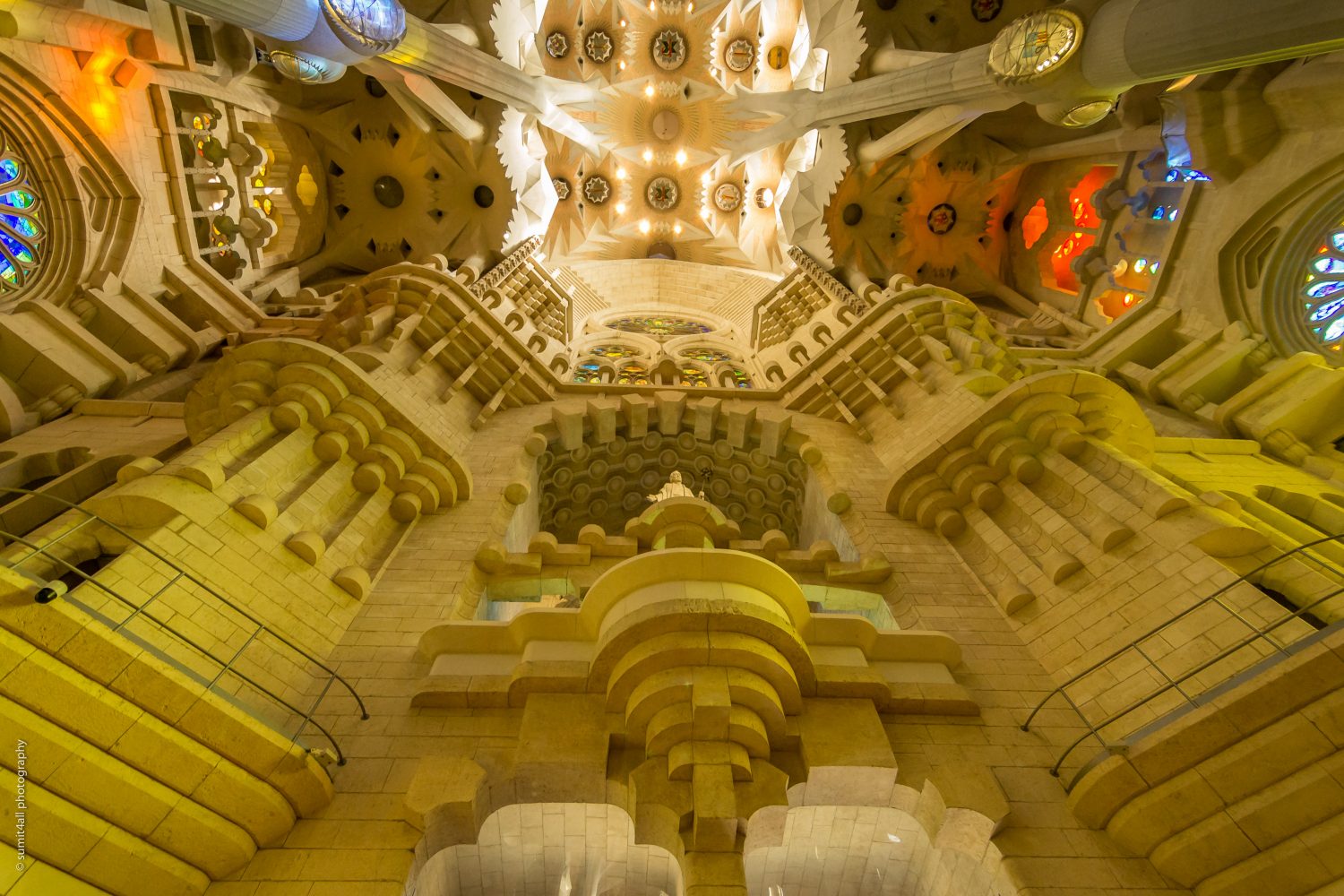 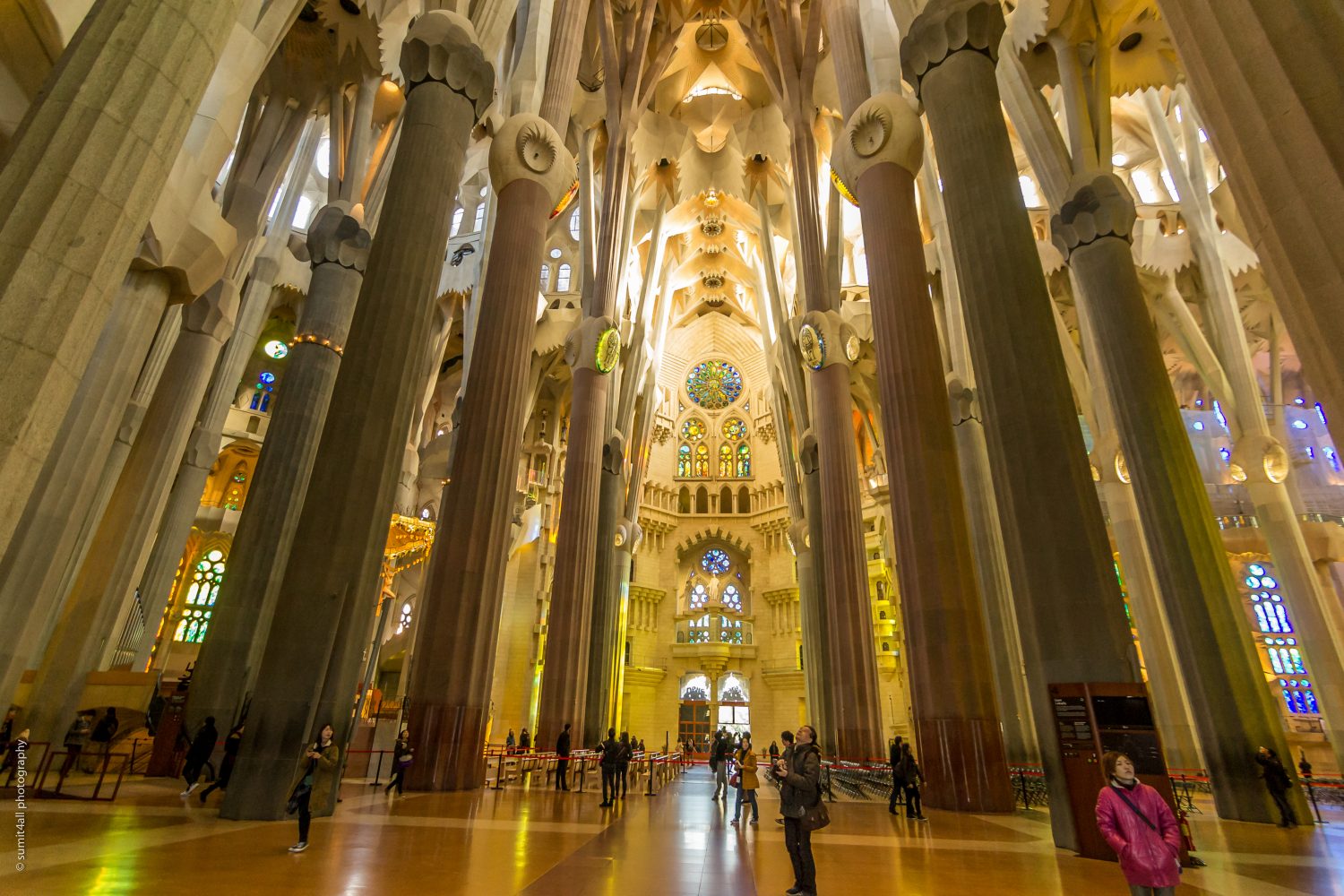 The Inside of the Sagrada Familia

One gets humbled by the enormity of the basilica. But it is not just the exterior which will amaze you. The peace and serenity that I experienced inside was second to none. It is probably the vision that Gaudi saw for every visitor for centuries to come. Even in its incomplete state, with its huge spires and tall roof, the intricate carvings of angels and trees and other delicate designs, the basilica exudes the architectural genius of Gaudi.

It took me more than half a day to try out different compositions and photograph the beauty of the basilica. I always reach popular tourist destinations early, and reaching before the tourist crowd allows me to get a few unique photographs – without the tourists in them. I spend a few hours finding unique angles and the perfect light to capture the outside of the basilica before it was open, and the first picture in this essay (with the reflection in the pond) is from early morning.

But when I stepped inside, I froze. The overwhelming beauty of the interiors was enough to make me completely forget my camera for a while! A completely different ensemble greeted me. The serene whiteness of the stone walls, bathed in shimmering colours that emanated from the stained glass windows was mesmerizing. For me it was second only to the Taj Mahal which I have visited a few times back in India. When I am inside monuments like the Taj Mahal or the Sagrada Familia, I wonder what inspired some men to envision and build a place of such grandeur! 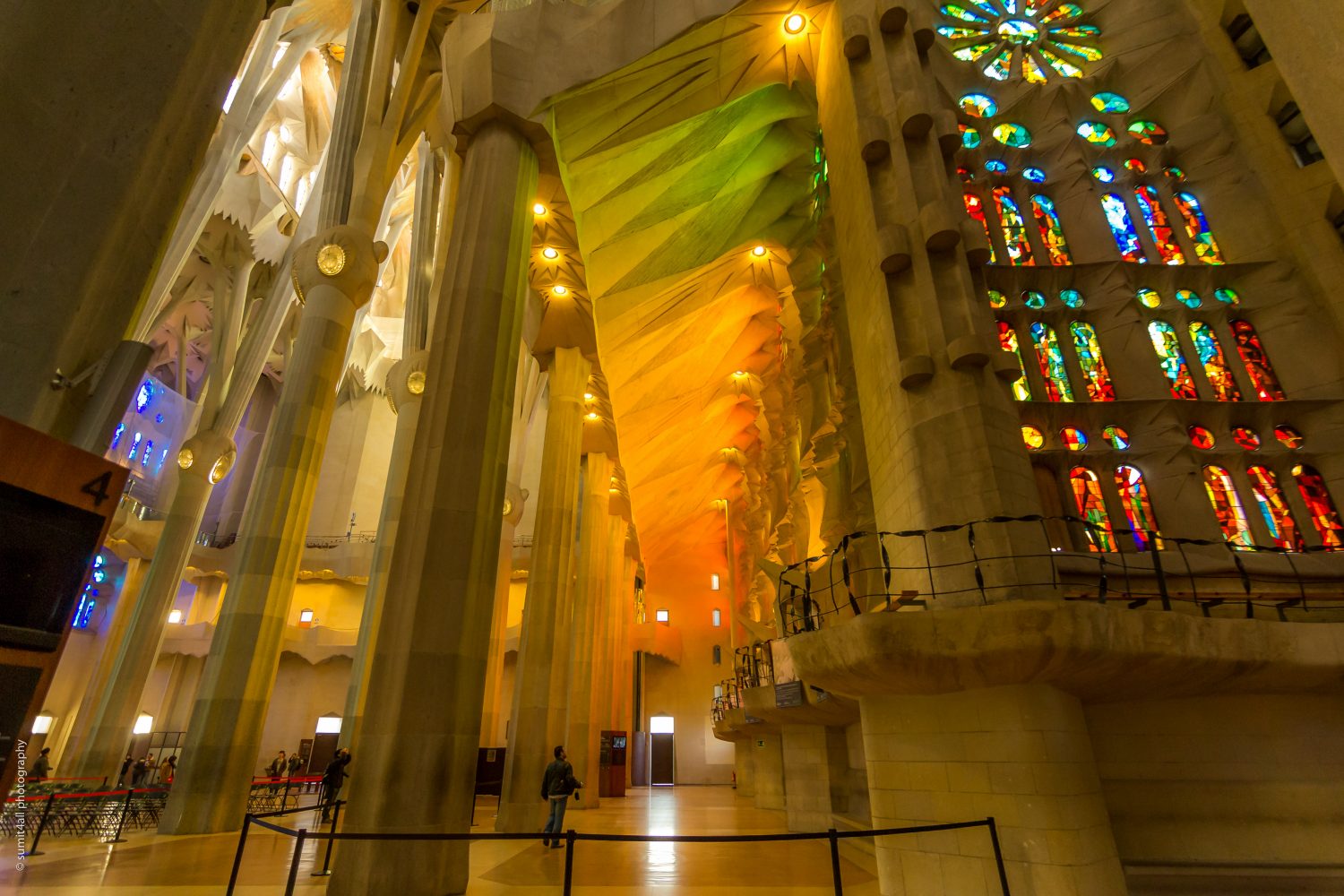 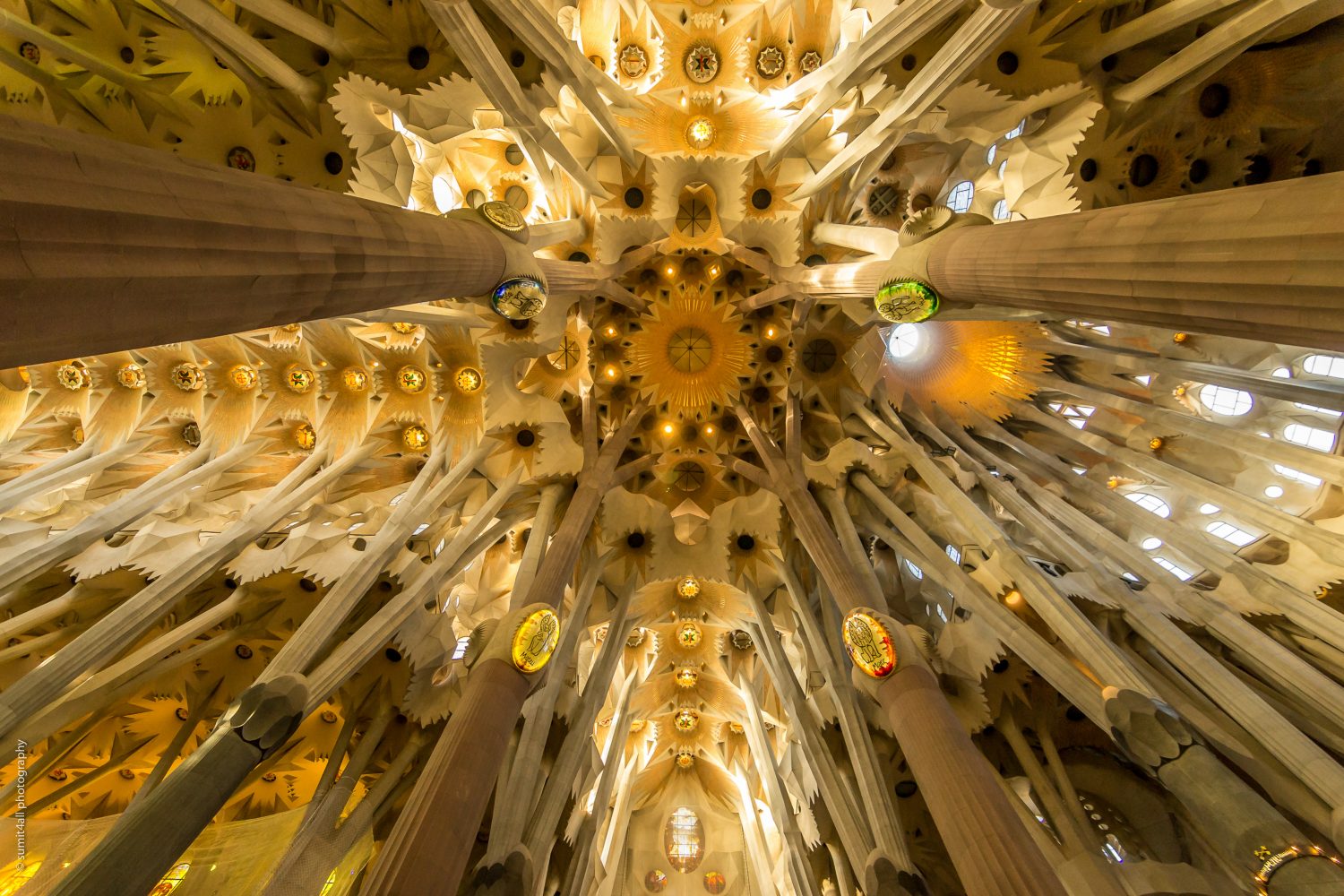 I have slowly come to understand photography as an art medium, but standing inside the Sagrada Familia makes you feel so small and the act of making photographs so insignificant. Whatever photos I could make in the few hours and a few visits to the Sagrada Familia seems so insignificant when compared to the effort and time that has gone into building this gigantic artistic expression of Gaudi.

Yes, the photographer in me sprang to life as I started making different compositions inside and outside the basilica. The roof of the Sagrada Familia is in perfect symmetry, and it is in such moments that composing photographs sometimes becomes a challenge. It is said Gaudi used inspiration from nature, with the roof resembling a honeycomb, and there are hardly any tutorials on how to photograph a honeycomb 😉

To design and create interiors that are perfectly round, without any sharp corners reflects the precision with which the architecture has been planned. The elaborate roof, the huge columns, doors of different sizes and finally the towering alter, all make for an enthralling visit.

According to the original plan, there are eighteen spires in the Sagrada Familia, all of different height, designed to represent in the ascending order – the Twelve Apostles, Four Evangelists, the Virgin Mary, and the tallest spire representing Jesus Christ.

I wanted to photograph the monument from a touristic point of view, and how people took selfies and enjoyed their moment of fame in front of the monument. The open air sightseeing bus always makes its most important stop just behind the Sagrada Familia evoking “wows” from the people onboard, while those who get down often get busy in buying their favourite “Sagrada” souvenir from many shops around the Sagrada Familia.

In the age of globalisation and travel, it is amazing to see how Gaudi’s masterpiece has become a central economic landmark for the city of Barcelona. It is now the number one tourist attraction in the city, welcoming 3 million annual visitors. With the city earning around one-fifth of its GDP from tourism, the importance of Sagrada Familia in that mix cannot be ignored. 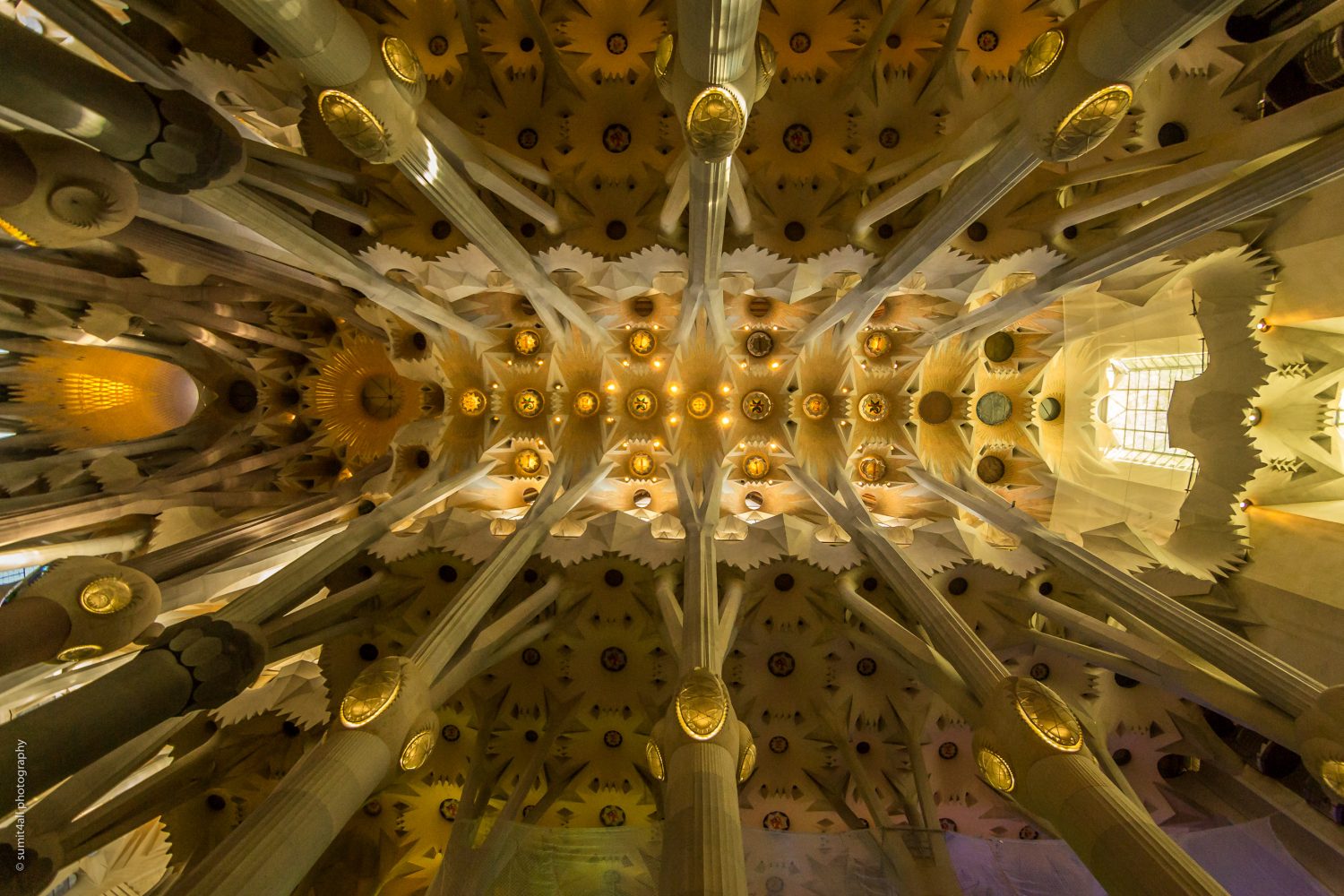 The Sagrada Familia is a religious monument, an architectural marvel and must visit for tourists. It is already a symbol of Barcelona and Spain, and one of the most popular tourist destinations in the whole continent. One can get to the Sagrada Familia by the metro easily. It’s better to pre-book entry tickets online to avoid long queues.

For those who love photography, it is advised to visit either early in the morning, or late in the evening. This can help avoiding the mobile-flashing, selfie-loving tourists, and at the same time can get the best light of sunrise and sunset. If you reach early enough, you have the chance of making a few pictures without any people in them, and if you visit after nightfall, you can get a picture when the Sagrada Familia is completely lit up, and its reflection shines perfectly in the small pond outside it.

Pro Tip – Don’t forget to bring a wide angle lens as, believe me, you will not regret it. 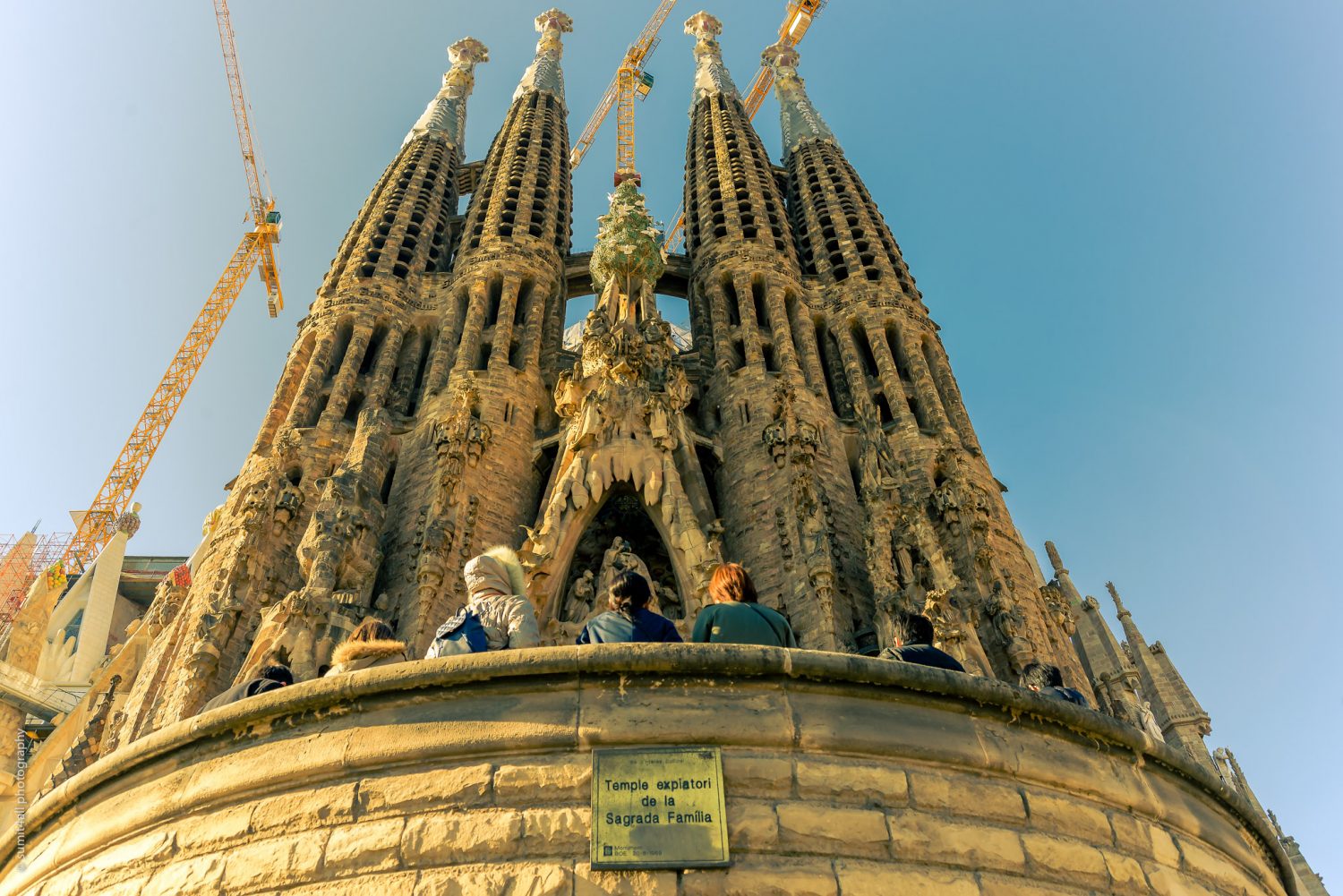 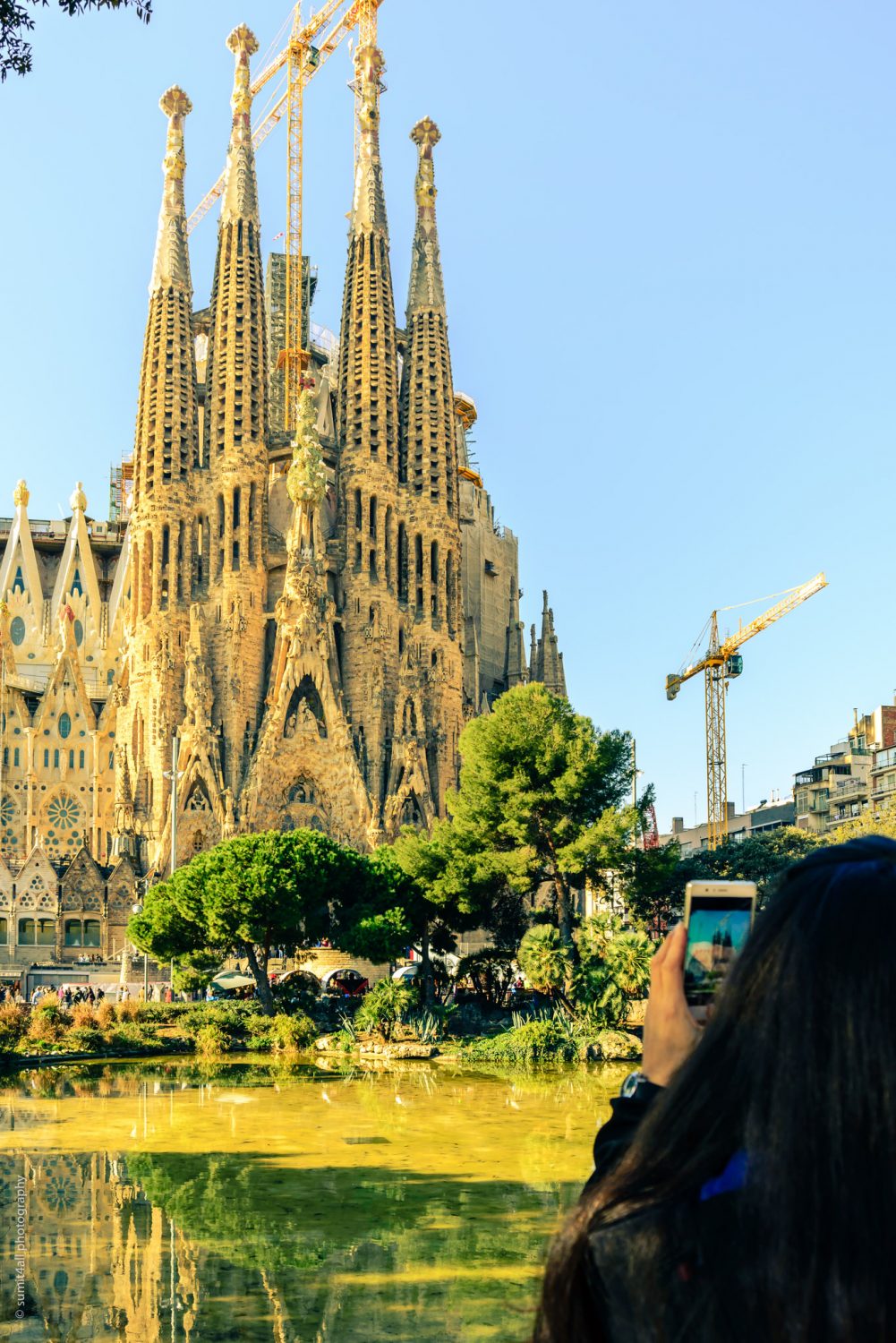 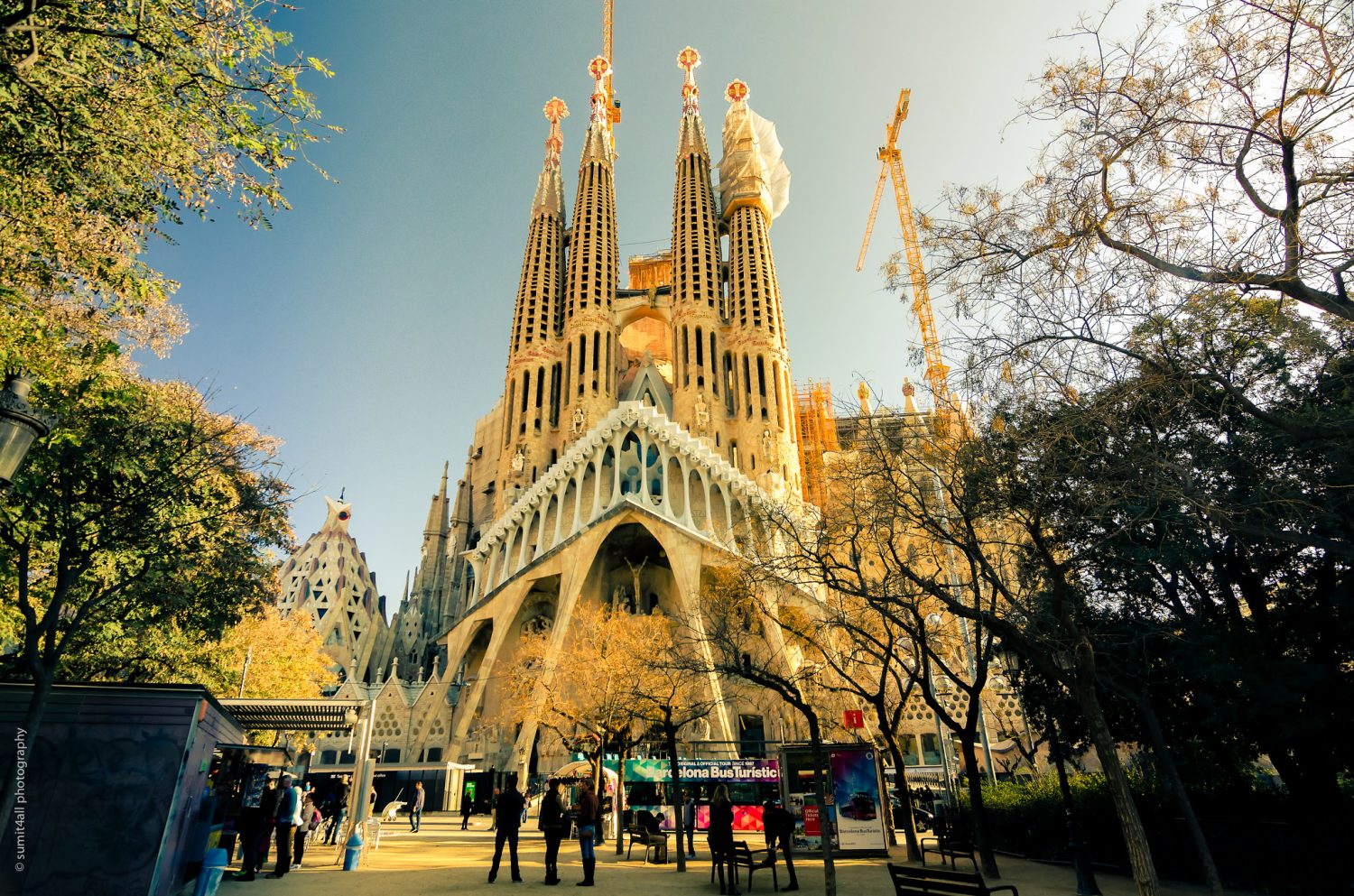 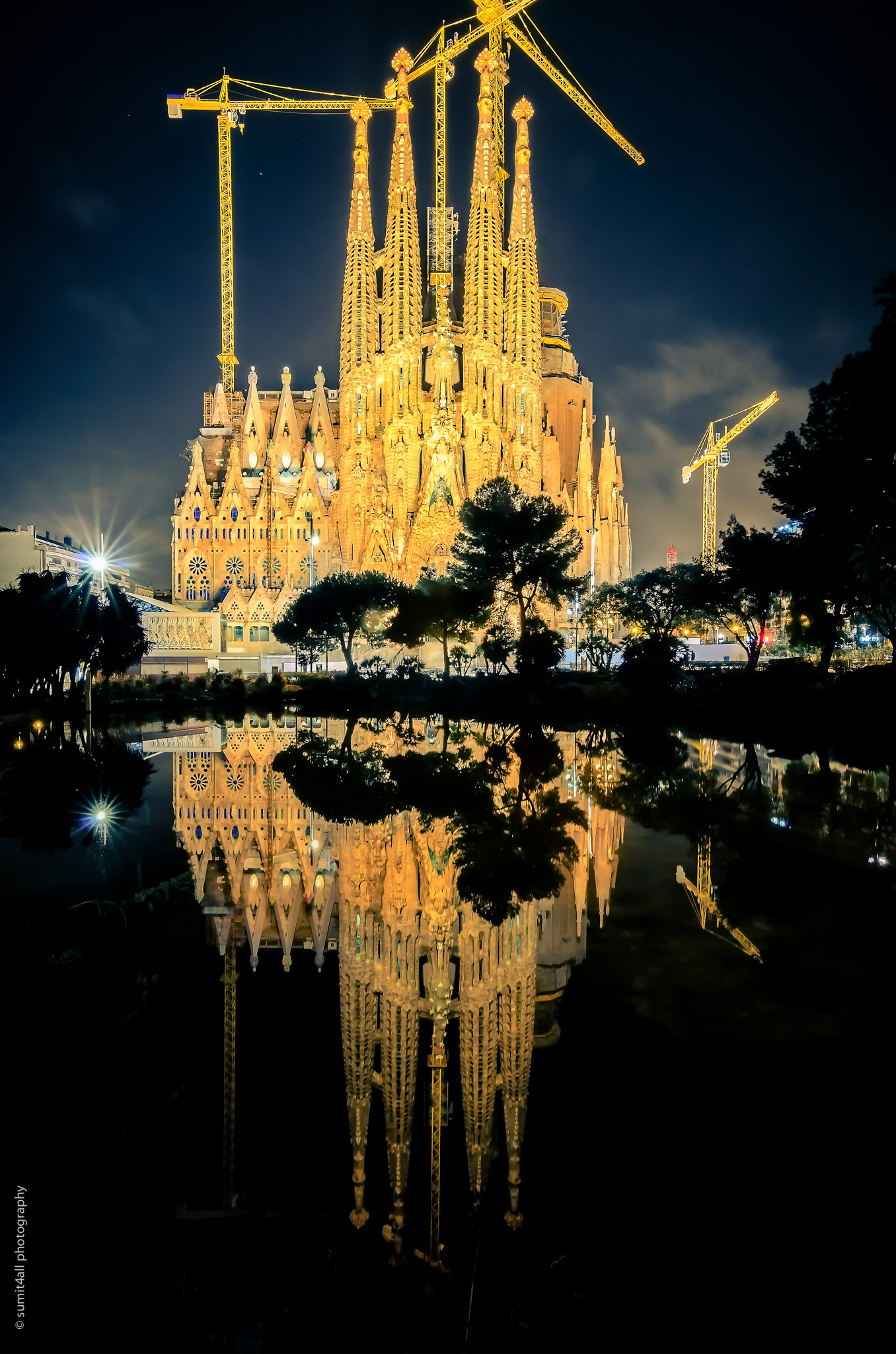